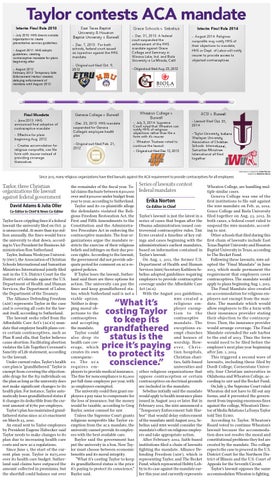 Where did all the cups go? Page 4

What’s next for Congress?

A look at US midterm election results and the expectations for a Republican-controlled Congress. Page 3

You are the voice. We are the Echo.

- Dec. 31, 2013: A federal court suspended the enforcement of the HHS mandate against Grace College and Seminary in Winona Lake, Ind. and Biola University in La Mirada, Calif.

- August 2014: Religious nonprofits may notify HHS of their objections to mandate; HHS or Dept. of Labor will notify insurer to provide access to objected contraceptives

Reaping the harvest After ten years, members of OneVerse are seeing the profits off their hard work. Page 4

How many Taylor students have written a novel available for purchase on Amazon before they came to college? Sophomore Lincoln Reed has. He sits down and talks to The Echo about the novel. Page 6

Since 2012, many religious organizations have filed lawsuits against the ACA requirement to provide contraceptives for all employees

Taylor Swift has pulled all of her music from Spotify but one song and has kept “1989” to CD and iTunes release only. Page 7

Taylor faces crippling fines if a federal lawsuit the university filed on Oct. 31 is unsuccessful. At more than $30 million annually, the fines would force the university to shut down, according to Vice President for Business Administration Ron Sutherland. Taylor, Indiana Wesleyan University (IWU), the Association of Christian Schools International and Samaritan Ministries International jointly filed suit in the U.S. District Court for the District of Colorado against the U.S. Department of Health and Human Services, the Department of Labor, the Department of the Treasury. The Alliance Defending Freedom (ADF) represents Taylor in the case and is covering all costs for the lawsuit itself, according to Sutherland. The lawsuit seeks relief from the Affordable Care Act’s (ACA’s) mandate that employer health plans cover certain contraceptives, such as Plan B and ella, that Taylor believes cause abortion. Facilitating abortion violates the Life Together Covenant’s Sanctity of Life statement, according to the lawsuit. Under current rules, Taylor’s health care plan is “grandfathered.” Taylor is exempt from covering the objectionable drugs for the 831 individuals on the plan as long as the university does not make significant changes to its health plan. For instance, Taylor automatically loses grandfathered status if it changes its deductible from the current amount of $760 per employee. Taylor’s plan has maintained grandfathered status since ACA’s enactment on March 23, 2010. An email sent to Taylor employees by President Eugene Habecker said Taylor needs to make changes to its plan due to increasing health care costs and new ACA regulations. Since June 1, the start of the current plan year, Taylor is $275,000 over its health care budget. Sutherland said claims have outpaced the amount collected in premiums, but the shortfall could balance out over

the remainder of the fiscal year. Total claims fluctuate between $300,000 over and $300,000 under budget from year to year, according to Sutherland. Taylor and its co-plaintiffs allege the defendants violated the Religious Freedom Restoration Act, the First and Fifth Amendments to the Constitution and the Administrative Procedure Act in enforcing the contraceptive mandate. The four organizations argue the mandate restricts the exercise of their religious beliefs and infringes on their due process rights. According to the lawsuit, the government did not provide adequate period for comment on ACA-required policies. If Taylor loses the lawsuit, Sutherland said there are three options for action. The university can pay the fines and keep grandfathered status, which Sutherland said is not a viable option. Neither is dropping moral objections to the contraceptives and accepting the mandate. Taylor could also drop its health care coverage, which creates its own consequences. The ACA requires employers to provide medical insurance. The fine for noncompliance is $2,000 per full-time employee per year, with 30 employees exempted. The university could then grant employees a pay raise to compensate for the loss of insurance, but the money would be taxable, according to Greg Baylor, senior counsel for ADF. Unless the Supreme Court grants religious nonprofits like Taylor exemption from the ACA mandate, the university cannot provide its employees with the best available care. Baylor said the government has put the university in a box. Now Taylor must choose between economic benefits and its moral integrity. “What it’s costing Taylor to keep its grandfathered status is the price it’s paying to protect its conscience,” Baylor said.

Taylor’s lawsuit is just the latest in a series of cases that began after the Obama administration issued controversial contraceptive rules. The Echo created a timeline of key rulings and cases beginning with the administration’s earliest mandates, based on information contained in Taylor’s lawsuit. On Aug. 1, 2011, the former U.S. Department of Health and Human Services (HHS) Secretary Kathleen Sebelius adopted guidelines requiring employers to provide contraceptive coverage under the Affordable Care Act (ACA). With the August 2011 guidelines, HHS created a religious employer exemption to the contraceptive mandate. The exceptions exempt churches and houses of worship. Howe v e r, C h r i s tian hospitals, Christian charities, faith-based universities and other religious organizations that oppose contraception or certain contraceptives on doctrinal grounds are included in the mandate. Sebelius initially said the mandate would apply to health insurance plans issued in August 2012 or later. But in February 2012, the HHS announced a “Temporary Enforcement Safe Harbor” that would delay enforcement of the mandate until August 2013. Sebelius said HHS would consider the mandate’s effect on religious employers and take appropriate action. After February 2012, faith-based institutions filed a chain of lawsuits fighting the mandate. Alliance Defending Freedom (ADF), which is representing Taylor, and The Becket Fund, which represented Hobby Lobby in its case against the mandate earlier this year and currently represents

“What it’s costing Taylor to keep its grandfathered status is the price it’s paying to protect its conscience.”

Wheaton College, are handling multiple similar cases. Geneva College was one of the first institutions to file suit against the HHS mandate on Feb. 21, 2012. Grace College and Biola University filed together on Aug. 23, 2012. In both cases, a federal court ruled to suspend the HHS mandate, according to ADF. Other schools that filed during this first chain of lawsuits include East Texas Baptist University and Houston Baptist University in Texas, according to The Becket Fund. Following these lawsuits, HHS adopted the “Final Mandate” in June 2013, which made permanent the requirement that employers cover contraceptives. The mandate would apply to plans beginning Aug. 1, 2013. The Final Mandate also created an accommodation for religious employers not exempt from the mandate. The mandate which would allow employers to file a form with their insurance provider stating their objection to the contraceptives. Then, the insurance provider would arrange coverage. The Final Mandate extended the safe harbor to the end of 2013. Thus the form would need to be filed before the employer’s next plan year beginning after Jan. 1, 2014. This triggered a second wave of lawsuits, including those filed by Dordt College, Cornerstone University, four Christian universities in Oklahoma and Wheaton College, according to ADF and the Becket Fund. On July 3, the Supreme Court ruled Wheaton did not have to fill out any forms, and it prevented the government from imposing enormous fines against the college, Wheaton’s Director of Media Relations LaTonya Taylor told The Echo. According to Taylor, Wheaton’s Board voted to continue Wheaton’s lawsuit because the accommodation does not resolve the moral and constitutional problems they feel are created by the mandate. The college expects the case to proceed in the U.S. District Court for the Northern District of Illinois and the U.S. Court of Appeals for the Seventh Circuit. Taylor’s lawsuit opposes the same accommodation Wheaton is fighting.

Taylor and three other Christian organizations filed a lawsuit against the federal government in protest of the ACA mandate requiring them to provide certain contraceptives in employee insurance plans. Two articles and a timeline break down the lawsuit. 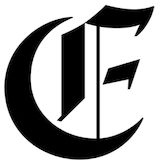