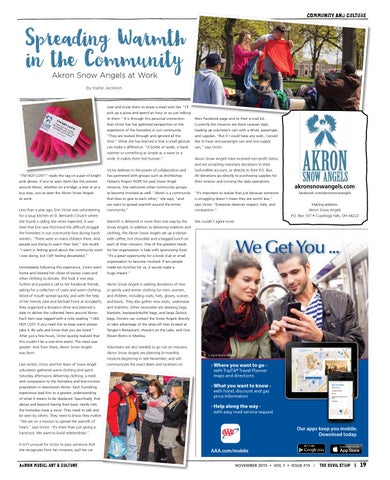 over and invite them to share a meal with her. “I’ll pick up a pizza and spend an hour or so just talking to them.” It is through this personal connection that Victor has has gathered perspective on the experience of the homeless in our community. “They are looked through and ignored all the time.” What she has learned is that a small gesture can make a difference. “A bottle of water, a hand warmer or something as simple as a wave or a smile. It makes them feel human.”

“I’M NOT LOST!” reads the tag on a pair of bright pink gloves. If you’ve seen items like this pinned around Akron, whether on a bridge, a tree or at a bus stop, you’ve seen the Akron Snow Angels at work. Less than a year ago, Erin Victor was volunteering for a soup kitchen at St. Bernard’s Church where she found a calling she never expected. It was here that Erin saw first-hand the difficult struggle the homeless in our community face during harsh winters. “There were so many children there. And people just trying to warm their feet,” she recalls. “I went in feeling good about the community work I was doing, but I left feeling devastated.” Immediately following this experience, Victor went home and cleared her closet of excess coats and other clothing to donate. She took it one step further and posted a call to her Facebook friends, asking for a collection of coats and warm clothing. Word of mouth spread quickly, and with the help of her friends Julie and Michael Farris at Annabell’s, they organized a donation drive and planned a date to deliver the collected items around Akron. Each item was tagged with a note reading “I AM NOT LOST. If you need this to keep warm please take it. Be safe and know that you are loved.” After just a few hours, Victor quickly realized that this couldn’t be a one-time event. The need was greater. And from there, Akron Snow Angels was born. Last winter, Victor and her team of Snow Angel volunteers gathered warm clothing and spent Saturday afternoons delivering clothing, a meal and compassion to the homeless and low-income population in downtown Akron. Each humbling experience lead Erin to a greater understanding of what it means to be displaced. Specifically, that above and beyond having their basic needs met, the homeless have a voice: They need to talk and be seen by others. They need to know they matter. “We are on a mission to spread the warmth of heart,” says Victor. “It’s more than just giving a hand-out. We want to build relationships.” It isn’t unusual for Victor to pass someone that she recognizes from her missions, pull her car

Victor believes in the power of collaboration and has partnered with groups such as Archbishop Hoban’s Project HOPE for past Snow Angel missions. She welcomes other community groups to become involved as well. “Akron is a community that likes to give to each other,” she says, “and we want to spread warmth around the entire community.” Warmth is delivered in more than one way by the Snow Angels. In addition to delivering toiletries and clothing, the Akron Snow Angels set up a station with coffee, hot chocolate and a bagged lunch on each of their missions. One of the greatest needs for her organization is help with sponsoring food. “It’s a great opportunity for a book club or small organization to become involved. If ten people made ten lunches for us, it would make a huge impact.”

their Facebook page and to their e-mail list. Currently the missions are done caravan style, loading up volunteer’s cars with a driver, passenger, and supplies. “But if I could have any wish, I would like to have one passenger van and one supply van,” says Victor. Akron Snow Angels have received non-profit status and are accepting monetary donations to their GoFundMe account, or directly to their P.O. Box. All donations go directly to purchasing supplies for their mission and running the daily operations. “It’s important to realize that just because someone is struggling doesn’t mean they are worth less,” says Victor. “Everyone deserves respect, help, and compassion.”

Akron Snow Angels is seeking donations of new or gently used winter clothing for men, women, and children, including coats, hats, gloves, scarves and boots. They also gather new socks, underwear and toiletries. Other necessities are sleeping bags, blankets, backpack/duffel bags, and large Ziplock bags. Donors can contact the Snow Angels directly, or take advantage of the drop-off sites located at Tangier’s Restaurant, Howie’s on the Lake, and One Eleven Bistro in Medina. Volunteers are also needed to go out on missions. Akron Snow Angels are planning bi-monthly missions beginning in late November, and will communicate the exact dates and locations on

• What you want to know with hotel, discount and gas price information

Once again, we go all out on good eats, great art and Akron's creative culture. Along the way, we meet sculptor Woodrow Nash, interview author Roxane Gay and illusionist Criss Angel, and look back at how the Mayflower Hotel came to be. Plus, we've got the skinny on making an all-local Thanksgiving meal AND some great vegan options if you swing that way. Of course, we highlight a host of cool events (Akron Comic Con, Slide Jam, PechaKucha Night, etc.), fantastic music (Mint Condition, Joseph Arthur, the Gage Brothers, and many others. 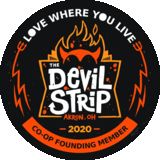