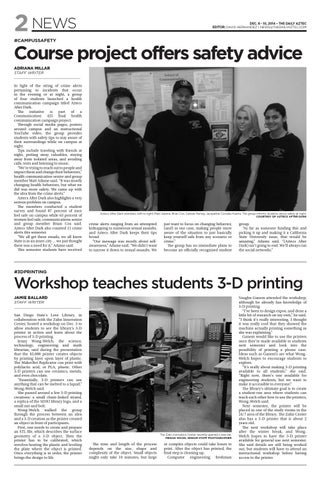 Course project offers safety advice ADRIANA MILLAR STAFF WRITER ____________________________________ In light of the string of crime alerts pertaining to incidents that occur in the evening or at night, a group of four students launched a health communication campaign titled Aztecs After Dark. The initiative is part of a Communication 425 final health communication campaign project. Through social media pages, posters around campus and an instructional YouTube video, the group provides students with safety tips to stay aware of their surroundings while on campus at night. Tips include traveling with friends at night, putting away valuables, staying away from isolated areas, and avoiding calls, texts and listening to music. “We’re trying to reach out to people and impact them and change their behaviors,” health communication senior and group member Matt Adame said. “It was mostly changing health behaviors, but what we did was more safety. We came up with the idea from the crime alerts.” Aztecs After Dark also highlights a very serious problem on campus. The members conducted a student survey and found 87 percent of men feel safe on campus while 63 percent of women feel safe, communications senior and group member Brian Cox said. Aztecs After Dark also counted 11 crime alerts this semester. “We all get these emails, we all know State is in an inner-city … we just thought there was a need for it,” Adame said. This semester students have received

crime alerts ranging from an attempted kidnapping to numerous sexual assaults, and Aztecs After Dark keeps their tips broad. “Our message was mostly about selfawareness,” Adame said. “We didn’t want to narrow it down to sexual assaults. We

just want to focus on changing behavior, (and) in our case, making people more aware of the situation to just basically keep yourself safe from any scenario or crime.” The group has no immediate plans to become an officially recognized student

group. “As far as someone funding this and picking it up and making it a California State University issue, that would be amazing,” Adame said. “(Aztecs After Dark) isn’t going to end. We’ll always run the social networks.”

Workshop teaches students 3-D printing JAMIE BALLARD STAFF WRITER ____________________________________ San Diego State’s Love Library, in collaboration with the Zahn Innovation Center, hosted a workshop on Dec. 3 to allow students to see the library’s 3-D printer in action and learn about the process of 3-D printing. Jenny Wong-Welch, the science, technology, engineering and math librarian, said during the presentation that the $3,000 printer creates objects by printing layer upon layer of plastic. The MakerBot Replicator can print with polylactic acid, or PLA, plastic. Other 3-D printers can use ceramics, metals, and even chocolate. “Essentially, 3-D printers can use anything that can be melted to a liquid,” Wong-Welch said. She passed around a few 3-D printing creations: a small chain-linked strand, a replica of the SDSU library logo, and a small nut and bolt. Wong-Welch walked the group through the process between an idea and a 3-D creation as the printer created an object in front of participants. First, one needs to create and prepare an STL file, which describes the surface geometry of a 3-D object. Then the printer has to be calibrated, which involves heating the plastic and leveling the plate where the object is printed. Once everything is in order, the printer brings the design to life.

The time and length of the process depends on the size, shape and complexity of the object. Small objects might only take 10 minutes, but large

or complex objects could take hours to print. After the object has printed, the final step is cleaning up. Computer engineering freshman

Vaughn Ganem attended the workshop, although he already has knowledge of 3-D printing. “I’ve been to design expos, and done a little bit of research on my own,” he said. “I think it’s really interesting. I thought it was really cool that they showed the machine actually printing something as she was explaining.” Ganem would like to use the printers once they’re made available to students next semester and look into the possibility of printing a phone case. Ideas such as Ganem’s are what WongWelch hopes to encourage students to explore. “It’s really about making 3-D printing available to all students,” she said. “Right now, there’s one available for engineering students, but we want to make it accessible to everyone.” The library’s ultimate goal is to create a student-run area where students can teach each other how to use the printers, Wong-Welch said. Next semester, the printer will be placed in one of the study rooms in the 24/7 area of the library. The Zahn Center also has a 3-D printer that is about 2 years old. The next workshop will take place after the winter break, and WongWelch hopes to have the 3-D printer available for general use next semester. She said details are still being worked out, but students will have to attend an instructional workshop before having access to the printer. 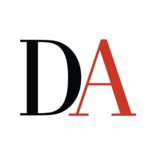