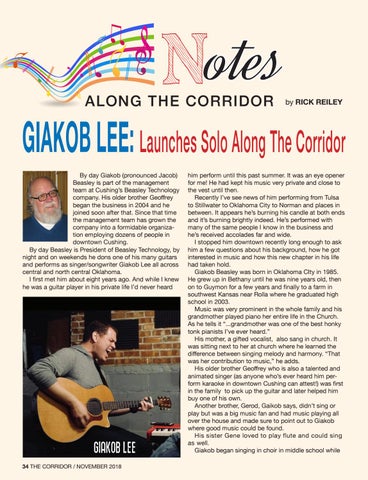 GIAKOB LEE: Launches Solo Along The Corridor By day Giakob (pronounced Jacob) Beasley is part of the management team at Cushing’s Beasley Technology company. His older brother Geoffrey began the business in 2004 and he joined soon after that. Since that time the management team has grown the company into a formidable organization employing dozens of people in downtown Cushing. By day Beasley is President of Beasley Technology, by night and on weekends he dons one of his many guitars and performs as singer/songwriter Giakob Lee all across central and north central Oklahoma. I first met him about eight years ago. And while I knew he was a guitar player in his private life I’d never heard

him perform until this past summer. It was an eye opener for me! He had kept his music very private and close to the vest until then. Recently I’ve see news of him performing from Tulsa to Stillwater to Oklahoma City to Norman and places in between. It appears he’s burning his candle at both ends and it’s burning brightly indeed. He’s performed with many of the same people I know in the business and he’s received accolades far and wide. I stopped him downtown recently long enough to ask him a few questions about his background, how he got interested in music and how this new chapter in his life had taken hold. Giakob Beasley was born in Oklahoma CIty in 1985. He grew up in Bethany until he was nine years old, then on to Guymon for a few years and finally to a farm in southwest Kansas near Rolla where he graduated high school in 2003. Music was very prominent in the whole family and his grandmother played piano her entire life in the Church. As he tells it “...grandmother was one of the best honky tonk pianists I’ve ever heard.” His mother, a gifted vocalist, also sang in church. It was sitting next to her at church where he learned the difference between singing melody and harmony. “That was her contribution to music,” he adds. His older brother Geoffrey who is also a talented and animated singer (as anyone who’s ever heard him perform karaoke in downtown Cushing can attest!) was first in the family to pick up the guitar and later helped him buy one of his own. Another brother, Gerod, Gaikob says, didn’t sing or play but was a big music fan and had music playing all over the house and made sure to point out to Giakob where good music could be found. His sister Gene loved to play flute and could sing as well. Giakob began singing in choir in middle school while Our November issue of The Corridor Magazine is our Giving Thanks publication. There are also a couple of interesting hunting stories in this...

Our November issue of The Corridor Magazine is our Giving Thanks publication. There are also a couple of interesting hunting stories in this...