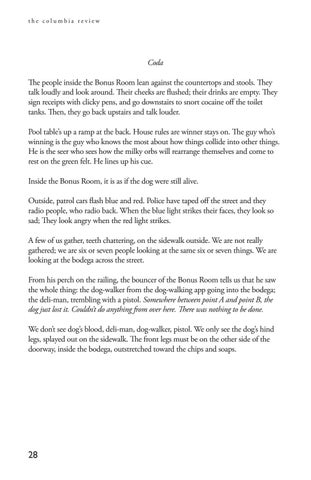 Coda The people inside the Bonus Room lean against the countertops and stools. They talk loudly and look around. Their cheeks are flushed; their drinks are empty. They sign receipts with clicky pens, and go downstairs to snort cocaine off the toilet tanks. Then, they go back upstairs and talk louder. Pool table’s up a ramp at the back. House rules are winner stays on. The guy who’s winning is the guy who knows the most about how things collide into other things. He is the seer who sees how the milky orbs will rearrange themselves and come to rest on the green felt. He lines up his cue. Inside the Bonus Room, it is as if the dog were still alive. Outside, patrol cars flash blue and red. Police have taped off the street and they radio people, who radio back. When the blue light strikes their faces, they look so sad; They look angry when the red light strikes. A few of us gather, teeth chattering, on the sidewalk outside. We are not really gathered; we are six or seven people looking at the same six or seven things. We are looking at the bodega across the street. From his perch on the railing, the bouncer of the Bonus Room tells us that he saw the whole thing: the dog-walker from the dog-walking app going into the bodega; the deli-man, trembling with a pistol. Somewhere between point A and point B, the dog just lost it. Couldn’t do anything from over here. There was nothing to be done. We don’t see dog’s blood, deli-man, dog-walker, pistol. We only see the dog’s hind legs, splayed out on the sidewalk. The front legs must be on the other side of the doorway, inside the bodega, outstretched toward the chips and soaps.

Undergraduate literary magazine from Columbia University that publishes poetry, short stories, and essays from authors all over the world.