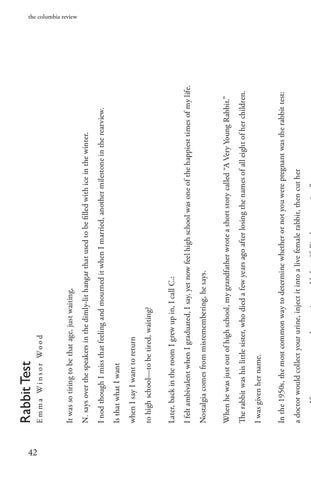 a doctor would collect your urine, inject it into a live female rabbit, then cut her

In the 1950s, the most common way to determine whether or not you were pregnant was the rabbit test:

I was given her name.

The rabbit was his little sister, who died a few years ago after losing the names of all eight of her children.

When he was just out of high school, my grandfather wrote a short story called â&#x20AC;&#x153;A Very Young Rabbit.â&#x20AC;?

Nostalgia comes from misremembering, he says.

I felt ambivalent when I graduated, I say, yet now feel high school was one of the happiest times of my life.

when I say I want to return

Is that what I want

I nod though I miss that feeling and mourned it when I married, another milestone in the rearview.

N. says over the speakers in the dimly-lit hangar that used to be filled with ice in the winter.

It was so tiring to be that age, just waiting,