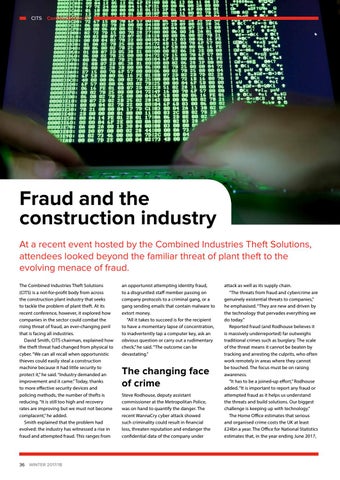 Fraud and the construction industry At a recent event hosted by the Combined Industries Theft Solutions, attendees looked beyond the familiar threat of plant theft to the evolving menace of fraud. The Combined Industries Theft Solutions (CITS) is a not-for-profit body from across the construction plant industry that seeks to tackle the problem of plant theft. At its recent conference, however, it explored how companies in the sector could combat the rising threat of fraud, an ever-changing peril that is facing all industries. David Smith, CITS chairman, explained how the theft threat had changed from physical to cyber. “We can all recall when opportunistic thieves could easily steal a construction machine because it had little security to protect it,” he said. “Industry demanded an improvement and it came.” Today, thanks to more effective security devices and policing methods, the number of thefts is reducing. “It is still too high and recovery rates are improving but we must not become complacent,” he added. Smith explained that the problem had evolved: the industry has witnessed a rise in fraud and attempted fraud. This ranges from

an opportunist attempting identity fraud, to a disgruntled staff member passing on company protocols to a criminal gang, or a gang sending emails that contain malware to extort money. “All it takes to succeed is for the recipient to have a momentary lapse of concentration, to inadvertently tap a computer key, ask an obvious question or carry out a rudimentary check,” he said. “The outcome can be devastating.”

The changing face of crime Steve Rodhouse, deputy assistant commissioner at the Metropolitan Police, was on hand to quantify the danger. The recent WannaCry cyber attack showed such criminality could result in financial loss, threaten reputation and endanger the confidential data of the company under

attack as well as its supply chain. “The threats from fraud and cybercrime are genuinely existential threats to companies,” he emphasised. “They are new and driven by the technology that pervades everything we do today.” Reported fraud (and Rodhouse believes it is massively underreported) far outweighs traditional crimes such as burglary. The scale of the threat means it cannot be beaten by tracking and arresting the culprits, who often work remotely in areas where they cannot be touched. The focus must be on raising awareness. “It has to be a joined-up effort,” Rodhouse added. “It is important to report any fraud or attempted fraud as it helps us understand the threats and build solutions. Our biggest challenge is keeping up with technology.” The Home Office estimates that serious and organised crime costs the UK at least £24bn a year. The Office for National Statistics estimates that, in the year ending June 2017, 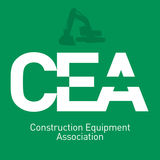 ConstructionWorX is the magazine of the Construction Equipment Association (CEA)

ConstructionWorX is the magazine of the Construction Equipment Association (CEA)