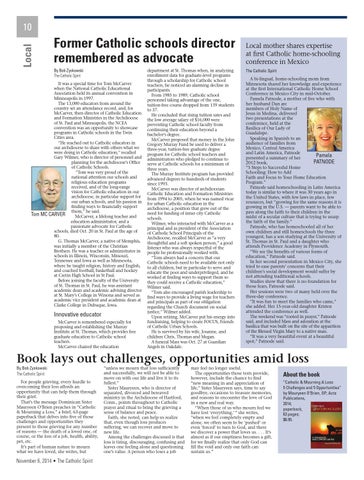 It was a special time for Tom McCarver when the National Catholic Educational Association held its annual convention in Minneapolis in 1997. The 13,000 educators from around the country set an attendance record, and, for McCarver, then director of Catholic Education and Formation Ministries in the Archdiocese of St. Paul and Minneapolis, the NCEA convention was an opportunity to showcase programs in Catholic schools in the Twin Cities area. “He reached out to Catholic educators in our archdiocese to share with others what we were doing in Catholic education,” recalled Gary Wilmer, who is director of personnel and planning for the archdiocese’s Office of Catholic Schools. “Tom was very proud of the national attention our schools and religious education programs received, and of the long-range vision for Catholic education in our archdiocese, in particular support for our urban schools, and his passion in finding ways to financially support them,” he said. Tom MC CARVER McCarver, a lifelong teacher and education administrator, and a passionate advocate for Catholic schools, died Oct. 20 in St. Paul at the age of 80. G. Thomas McCarver, a native of Memphis, was initially a member of the Christian Brothers. He was a teacher or administrator in schools in Illinois, Wisconsin, Missouri, Tennessee and Iowa as well as Minnesota, where he taught religion, history and English, and coached football, basketball and hockey at Cretin High School in St Paul. Before joining the faculty of the University of St. Thomas in St. Paul, he was assistant academic dean and academic advising director at St. Mary’s College in Winona and served as academic vice president and academic dean at Clarke College in Dubuque, Iowa.

department at St. Thomas when, in analyzing enrollment data for graduate-level programs through a scholarship for Catholic school teachers, he noticed an alarming decline in participants. From 1985 to 1989, Catholic school personnel taking advantage of the one, tuition-free course dropped from 139 students to 37. He concluded that rising tuition rates and the low average salary of $16,000 were preventing Catholic school faculty from continuing their education beyond a bachelor’s degree. McCarver proposed that money in the John Gregory Murray Fund be used to deliver a three-year, tuition-free graduate degree program for Catholic school teachers and administrators who pledged to continue to serve at Catholic schools for a minimum of three years. The Murray Institute program has provided advanced degrees to hundreds of students since 1993. McCarver was director of archdiocesan Catholic Education and Formation Ministries from 1994 to 2005, when he was named vicar for urban Catholic education in the archdiocese, a position that grew out of the need for funding of inner city Catholic schools. Wilmer, who interacted with McCarver as a principal and as president of the Association of Catholic School Principals of the Archdiocese, recalled McCarver as “a very thoughtful and a soft spoken person,” a good listener who was always respectful of the people he professionally worked with. “Tom always had a concern that our Catholic schools need to be available not only to all children, but in particular to serve and educate the poor and underprivileged, and he worked at finding ways to support them so they could receive a Catholic education,” Wilmer said. “Tom also encouraged parish leadership to find ways to provide a living wage for teachers and principals as part of our obligation regarding the Church document on social justice,” Wilmer added. Upon retiring, McCarver put his energy into fundraising, helping to create FOCUS, Friends of Catholic Urban Schools. He is survived by his wife, Josanne, and children Chris, Thomas and Megan. A funeral Mass was Oct. 27 at Guardian Angels in Oakdale.

Local mother shares expertise at first Catholic home-schooling conference in Mexico The Catholic Spirit A bi-lingual, home-schooling mom from Minnesota shared her knowledge and experience at the first International Catholic Home School Conference in Mexico City in mid-October. Pamela Patnode, a mother of five who with her husband Dan are members of Holy Name of Jesus in Medina, delivered two presentations at the conference, held at the Basilica of Our Lady of Guadalupe. Speaking in Spanish to an audience of families from Mexico, Central America and Latin America, Patnode Pamela presented a summary of her PATNODE 2012 book, “5 Steps to Successful Home Schooling: How to Add Faith and Focus to Your Home Education Program.” Patnode said homeschooling in Latin America today is similar to where it was 30 years ago in the United States, with few laws in place, few resources, but “growing for the same reasons it is growing in the U.S. — parents want to be able to pass along the faith to their children in the midst of a secular culture that is trying to usurp the faith of the family.” Patnode, who has homeschooled all of her own children and still homeschools the three youngest, has a son studying at the University of St. Thomas in St. Paul and a daughter who attends Providence Academy in Plymouth. “We see the benefits of various forms of education,” Patnode said. In her second presentation in Mexico City, she tried to ease parents’ concerns that their children’s social development would suffer by not attending traditional schools. Studies show that there is no foundation for those fears, Patnode said. Her sessions were two of many held over the three-day conference. “It was fun to meet the families who came,” she added. Her 15-year-old daughter Kristen attended the conference as well. The weekend was “rooted in prayer,” Patnode said, and included Mass and adoration at the basilica that was built on the site of the apparition of the Blessed Virgin Mary to a native man. “It was a very beautiful event at a beautiful spot,” Patnode said.

Book lays out challenges, opportunities amid loss By Bob Zyskowski The Catholic Spirit For people grieving, every hurdle to overcoming their loss affords an opportunity that can help them through their grief. That’s the message Dominican Sister Mauryeen O’Brien preaches in “Catholic & Mourning a Loss,” a brief, 63-page paperback that delves into five of those challenges and opportunities they present to those grieving for any number of reasons — the death of a loved one, of course, or the loss of a job, health, ability, pet, etc. It’s part of human nature to mourn what we have loved, she writes, but

“unless we mourn that loss sufficiently and successfully, we will not be able to move on with our life and live it to its fullest.” Sister Mauryeen, who is director of separated, divorced and bereaved ministry in the Archdiocese of Hartford, Conn., points throughout to Catholic prayer and ritual to bring the grieving a sense of balance and peace. Faith, she noted, can help us realize that, even though loss produces suffering, we can recover and move to new life. Among the challenges discussed is that loss is tiring, discouraging, confusing and leaves one feeling alone and questioning one’s value. A person who loses a job

may feel no longer useful. The opportunities those tests provide, however, include the chance to find “new meaning in and appreciation of life,” Sister Mauryeen says, time to say goodbye, occasions to treasure memories, and reasons to encounter the love of God in a new and real way. “When those of us who mourn feel we have lost ‘everything,’ ” she writes, “when we feel completely empty and alone, we often seem to be ‘pushed’ or even ‘forced’ to turn to God, and there we discover a power that loves us. . . . It’s almost as if our emptiness becomes a gift, for we finally realize that only God can fill the void and only our faith can sustain us.” 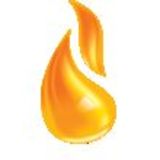