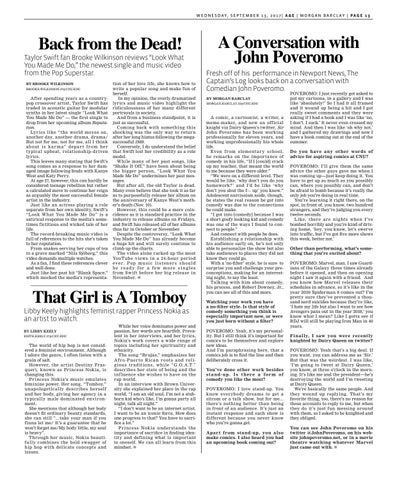 After spending years as a countrypop crossover artist, Taylor Swift has traded in acoustic guitar for modular synths in her latest single “Look What You Made Me Do” — the first single to drop from her upcoming album Reputation. Lyrics like “the world moves on, another day, another drama, drama/ But not for me, not for me, all I think ab out i s k a r m a” dep a r t f r om her typical upbeat, relationship - driven lyrics. This leaves many stating that Swift’s song comes as a response to her damaged image following feuds with Kanye West and Katy Perry. At age 27, however, this can hardly be considered teenage rebellion but rather a calculated move to continue her reign as arguably the most successful female artist in the industry. Just like an actress playing a role separate from her own identity, Swift’s “Look W hat You Made Me Do” is a satirical response to the media’s sometimes fictitious and wicked tale of her life. The record-breaking music video is full of references to the hits she’s taken to her reputation. From snakes serving her cups of tea to a grave marked “Nils Sjöberg,” this video demands multiple watches. As a fan, I find these references clever and well-done. Just like her past hit “Blank Space,” which mocked the media’s representa-

tion of her love life, she knows how to write a popular song and make fun of herself. In my opinion, the overly dramatized lyrics and music video highlight the ridiculousness of her many different portrayals in society. And from a business standpoint, it is just as successful. Coming back with something this shocking was the only way to return after her long hiatus following the megasuccessful 1989. Conversely, I do understand the belief that Swift lost her credibility as a role model. While many of her past songs, like “Shake It Off,” have been about being the bigger person, “Look W hat You Made Me Do” undermines her past messages. But after all, the old Taylor is dead. Many even believe that she took it as far as to purposefully release her album on the anniversary of Kanye West’s mother’s death (Nov. 10). However, this could be a mere coincidence as it is standard practice in the industry to release albums on Fridays, and Swift has released all of her albums thus far in October or November. Despite the controversy, “Look What You Made Me Do” has already become a huge hit and will surely continue to climb up the charts. The video alone racked up the most YouT ube views i n a 2 4 -hou r period e v e r. P o p mu si c l i s t e n e r s s h o u l d be ready for a few more si ng les from Swift before her big release in November. n

The world of hip hop is not considered a feminist environment. Although I adore the genre, I often listen with a grain of salt. However, the artist Destiny Frasqueri, known as Princess Nokia, is changing this. Princess Nokia’s music emulates feminine power. Her song, “Tomboy,” unapologetica l ly describes hersel f and her body, giving her agency in a typically male dominated environment. She mentions that although her body doesn’t fit ordinary beauty standards, she can still “…take your man if you finna let me/ It’s a guarantee that he won’t forget me/My body little, my soul is heavy”. Through her music, Nokia beautifully combines the bold swagger of hip hop with delicate concepts and issues.

While her voice dominates power and passion, her words are heartfelt. Prevalent in her interviews, and her lyrics, Nokia’s work covers a wide range of topics including her spirituality and ethnicity. The song “Brujas,” emphasizes her A f ro -P uer to R ic a n ro ot s a nd rel ig iou s t radition s, whi le “G.O. A .T.” describes her state of being and the inf luence she wishes to have on the rap world. In an interview with Brown University she explained her place in the rap world, “I am an old soul. I’m not a stubborn kid who’s like, I’m gonna party all night, talk all night.” “I don’t want to be an internet artist. I want to be an iconic force. How does one progress to that? You have to sacrifice a lot.” P ri ncess Nokia u nderstands t he importance of sacrifice in finding identity and defining what is important to oneself. We can all learn from this mindset. n

A comic, a cartoonist, a writer, a meme-maker, and now an official knight via Dairy Queen’s twitter, Sir John Poveromo has been working professionally for eleven years, and working unprofessionally his whole life. Even f rom element a r y school, he remarks on the importance of comedy in his life, “If I [could] crack up my teacher, that meant the world to me because they were older.” “We were on a different level. They would be like, ‘why don’t you do you homework? ’ and I’d be like ‘why don’t you shut the f--- up’ you know.” Adolescent narcissism aside, though, he states the real reason he got into comedy was due to the connections he could make. “I got into [comedy] because I was a short goofy looking kid and comedy was one of the ways I found to connect to people.” And connect with people he does. Establishing a relationship with his audience early on, he’s not only able to personalize the show but also take audiences to places they did not know they could go. With a ‘no-filter’ style, he is sure to surprise you and challenge your preconceptions, making for an interesting night, to say the least. Talking with him about comedy, his process, and Robert Downey, Jr., you can see all of this and more. Watching your work you have a no-filter style. Is that style of comedy something you think is especially important now, or were you just born without a filter? POVEROMO: Yeah, it’s my personality. But I still think it’s important for comics to be themselves and explore new ideas. And I’m paraphrasing here, that a comics job is to find the line and then deliberately cross it. You’ve done other work besides s t a nd - up. I s t her e a for m of comedy you like the most? POVEROMO: I love stand-up. You know everybody dreams to get a sitcom or a talk show, but for me... there’s nothing better than being in front of an audience. It’s just an instant response and each show is different because you never know who you’re gonna get. Apart from stand-up, you also make comics. I also heard you had an upcoming book coming out?

POVEROMO: I just recently got asked to put my cartoons, in a gallery and I was like ‘absolutely!’ So I had it all framed and it wound up being a hit and I got really sweet comments and they were asking if I had a book and I was like ‘no, I don’t. I suck.’ It never even crossed my mind. And then I was like ‘oh why not,’ and I gathered my drawings and now I have a book coming out at the end of the summer. Do you have any other words of advice for aspiring comics at CNU? POVEROMO: I’ll give them the same advice the other guys gave me when I was coming up—just keep doing it. You have to get up as much as you possibly can, where you possibly can, and don’t be afraid to bomb because it’s really the only job you’re doing in real time. You’re learning it right there, on the spot, in front of, you know, two hundred strangers, and they’re judging you every twelve seconds. Li ke, t here a re nights when I’ve bombed horribly and you’re kind of driving home, ‘hey, you know, let’s swerve into traffic, but I’ve got five more shows this week, better not.’ Other than performing, what’s something that you’re excited about? POVEROMO: Marvel, man. I saw Guardians of the Galaxy three times already before it opened, and then on opening night I saw it again with a friend. And you know how Marvel releases their schedules in advance, so it’s like in the year 2030 Spiderman 8 comes out? I’m pretty sure they’ve prevented a thousand nerd suicides because they’re like, ‘I hate my life but also I want to see how Avengers pans out in the year 2038,’ you know what I mean? Like I gotta see if RDJ will still be playing Iron Man in 40 years. Finally, I saw you were recently knighted by Dairy Queen on twitter? POVEROMO: Yeah that’s a big deal. If you want, you can address me as ‘Sir.’ But that was the weirdest. I was like, ‘I’m going to tweet at Dairy Queen,’ you know, at three o’clock in the morning. It’s like me and the president—he’s destroying the world and I’m tweeting at Dairy Queen. We’re basically the same people. And they wound up replying. That’s my favorite thing, too, there’s no reason for those accounts to reply to me, but when they do it’s just fun messing around with them, so I asked to be knighted and they obliged. You can see John Poveromo on his twitter @JohnPoveromo, on his website johnpoveromo.net, or in a movie theatre watching whatever Marvel just came out with. n 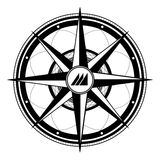