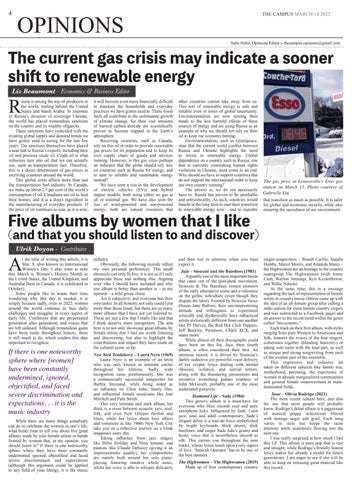 ussia is among the top oil producers in the world, trailing behind the United States and Saudi Arabia. In response to Russia’s invasion of sovereign Ukraine, the world has placed tremendous sanctions on the country and its wealthy oligarchs. These sanctions have coincided with the existing global supply and demand trends we have gotten used to seeing for the last few years. The sanctions themselves have placed a near halt to Russia’s exports, including their oil and precious crude oil. Crude oil is what refineries turn into oil that we can actually use, such as transportation fuel. Therefore, this is a direct determinant of gas prices in receiving countries around the world. This global crisis affects more than just the transportation fuel industry. In Canada, we make up about 2.5 per cent of the world’s consumption of oil. Canadians use oil to heat their homes, and it is a direct ingredient in the manufacturing of everyday products. If the price of oil continues to soar, as it is now,

it will become even more financially difficult to maintain the households and everyday practices we have gotten used to. These fossil fuels all contribute to the unfortunate growth of climate change, for their vast amounts of burned carbon dioxide are scientifically proven to become trapped in the Earth’s atmosphere. Receiving countries, such as Canada, rely on this oil in order to provide reasonable gas prices for its population and to keep its own supply chain of goods and services running. However, is this gas crisis perhaps an indicator that the globe should rely less on countries such as Russia for energy, and to turn to reliable and sustainable energy instead? We have seen a rise in the development of electric vehicles (EVs) and hybrid engine models, both using either no gas at all or minimal gas. We have also seen the rise of wind-powered and sun-powered energy; both are natural resources that

other countries cannot take away from us. This sort of renewable energy is safe and reliable even in times of global uncertainty. Environmentalists are now turning their heads to the less harmful effects of these sources of energy and are using Russia as an example of why we should not rely on their oil to keep our economy turning. Environmentalists, such as Greenpeace, state that the current world conflict between Russia and Ukraine highlights the need to invest in renewable energy. Global dependence on a country such as Russia, one that is currently committing human rights violations in Ukraine, must come to an end. Why should we have to support countries that do not support the international order to keep our own country running? The answer is, we do not necessarily have to. Russia has proven to be unreliable and untrustworthy. As such, countries would benefit in the long term to start their transition to renewable energy now – and to expedite

The gas price at Lennoxville’s Esso gas station on March 13. Photo courtesy of Gabrielle Liu that transition as much as possible. It is safer for global and economic security, while also ensuring the sacredness of our environment.

(and that you should listen to and discover) Ulrik Doyon - Contributor

t the time of writing this article, it is Mar. 8, also known as International Women’s Day. I also want to note that March is Women’s History Month in the United States, the United Kingdom, and Australia (here in Canada, it is celebrated in October). Some people like to waste their time wondering why this day is needed; it is simply because sadly, even in 2022, women around the world continue to face daily challenges and struggles in every aspect of daily life. Conditions that are perpetuated generation after generation, and voices that are left unheard. Although tremendous gains have been made throughout history, there is still much to do, which renders this date important to recognize.

If there is one noteworthy sphere where [women] have been constantly undermined, ignored, objectified, and faced severe discrimination and expectations. . . it is the music industry

While there are many things somebody can do to celebrate the women in one’s life, what better time to tell you about five great albums made by solo female artists or bands fronted by women that, in my opinion, you should listen to? If there is one noteworthy sphere where they have been constantly undermined, ignored, objectified, and faced severe discrimination and expectations (although this argument could be applied to any field of your liking), it is the music

industry. Obviously, the following records reflect my own personal preferences. This small chronicle can only fit five; it is not as if I only appreciate these and nothing else. Arguing over who I should have included and why one album is better than another is – in my opinion – a wild goose chase. Art is subjective, and everyone has their own tastes. In all honesty, not only could I put more than those listed, but there are so many more albums that I have not yet listened to. These are just a few that I really like and that I think deserve more recognition. The aim here is to not only showcase great albums by female artists that I feel are worth listening and discovering, but also to highlight the contributions and impact they have made on the cultural scene so far. New York Tendaberry – Laura Nyro (1969) Laura Nyro is an example of an artist who was only known in intimate circles throughout her lifetime. Sadly, wide recognition came posthumously. She was a commercially successful songwriter for Barbra Streisand, while being noted as an influence on Elton John, Steely Dan, and influential female musicians like Joni Mitchell and Patti Smith. This very intimate and stark album, her third, is a cross between acoustic jazz, soul, folk, and even New Orleans rhythm and blues, while her lyrics about love affairs and romances in late 1960s New York City take you on a reflective journey on a bleak imaginary rainy day. Taking influence from jazz singers like Billie Holiday and Nina Simone, and pianists like Claude Debussy (giving it an impressionistic quality), her compositions are mainly built around her solo pianoplaying featuring emotive whole notes, whilst her voice is able to whisper delicately

and then rise in intensity when you least expect it. Juju – Siouxsie and the Banshees (1981) Arguably one of the most important bands that came out of the post-punk movement, Siouxsie &amp; The Banshees remain pioneers of the early alternative scene and a reference on the gothic subculture (even though they dispute the label). Fronted by Siouxsie Sioux (Susan Jane Ballon), their uncompromising attitude and willingness to experiment sonically and rhythmically have influenced artists stylistically different from one another like PJ Harvey, the Red Hot Chili Peppers, Jeff Buckley, Paramore, Charli XCX, and many more. While almost all their discography could have been on this list, Juju, their fourth album, is often considered their best. An ominous record, it is driven by Siouxsie’s darkly seductive yet powerful vocal delivery of her cryptic lyrics dealing with mental illnesses, isolation, and surreal terrors, along with the thundering percussions and inventive screeching guitars courtesy of John McGeoch, probably one of the most underrated guitarists. Diamond Life – Sade (1984) This groovy album is a must-have for everyone who likes smooth soul and tasty saxophone licks. Influenced by funk, Latin jazz, soul and adult contemporary, Sade’s elegant debut is a tour-de-force embellished by bright keyboards, thick drums, slick basslines, and singer Sade Adu’s grainy and husky voice that is nevertheless smooth as silk. This carries you throughout the nine tracks, whose lyrics touch upon every aspect of love. ‘Smooth Operator’ has to be one of the best openers. The Highwomen – The Highwomen (2019) Made up of four contemporary country

singer-songwriters – Brandi Carlile, Natalie Hemby, Maren Morris, and Amanda Shires – the Highwomen are an homage to the country supergroup The Highwaymen (with Jonny Cash, Waylon Jennings, Kris Kristofferson, and Willie Nelson). At the same time, this is a message regarding the lack of representation of female artists in country music (Shires came up with the idea of an all-female group after calling a radio station for more female country singers and was redirected to a Facebook page) and an answer to the recent trend within the genre called “bro-country.” Each track on their first album, with styles ranging from pure Western to Americana and folk, features the voices of the four singers, sometimes together (blending heavenly) or taking solo turns with the lead part, as well as unique and strong songwriting from each of the women part of the ensemble. This impressive and cohesive set takes on different subjects like family ties, motherhood, parenting, the experience of women in already marginalized communities and general female empowerment in maledominated fields. Sour – Olivia Rodrigo (2021) The most recent release here, and also the one that most people will probably know, Rodrigo’s debut album is a juggernaut of musical poppy eclecticism filtered with teenage angst and grief. Each song varies in style but keeps the same intensity while seamlessly flowing into the next one. I was really surprised at how much I like this LP. This album is pure pop that is raw and straight, while Rodrigo’s brutally honest lyrics makes her already a model for future generations. I am eager to see if she will be able to keep on releasing great material like this record. 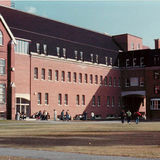