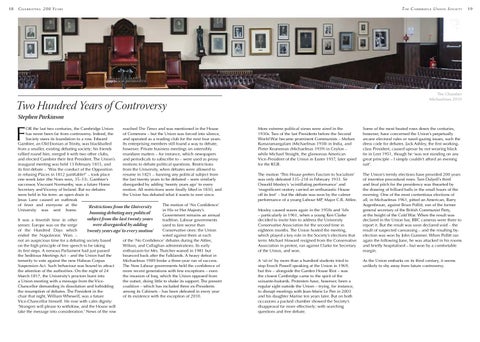 OR the last two centuries, the Cambridge Union reached The Times and was mentioned in the House has never been far from controversy. Indeed, the of Commons – but the Union was forced into silence, Society owes its foundation to a row. Edward and operated as a reading club for the next four years. Gambier, an Old Etonian at Trinity, was blackballed Its enterprising members still found a way to debate, from a smaller, existing debating society; his friends however. Private business meetings on ostensibly rallied round him, merged it with two other clubs, mundane matters – for instance, which newspapers and elected Gambier their first President. The Union’s and periodicals to subscribe to – were used as proxy inaugural meeting was held 13 February 1815, and motions to debate political questions. Restrictions its first debate – ‘Was the conduct of the Opposition from the University, when debates were allowed to in refusing Places in 1812 justifiable?’ – took place resume in 1821 – banning any political subject from one week later (the Noes won, 35–33). Gambier’s the last twenty years to be debated – were similarly successor, Viscount Normanby, was a future Home disregarded by adding ‘twenty years ago’ to every Secretary and Viceroy of Ireland. But no debates motion. All restrictions were finally lifted in 1830, and were held in his term: an open drain in the Union has debated what it wants to ever since. Jesus Lane caused an outbreak of fever and everyone at the The motion of ‘No Confidence’ ‘Restrictions from the University University was sent home. in His or Her Majesty’s banning debating any political Government remains an annual subject from the last twenty years It was a feverish time in other tradition. Labour governments were disregarded by adding senses: Europe was on the verge used to fare worse than of the Hundred Days which Conservative ones: the Union ‘twenty years ago’ to every motion’ ended the Napoleonic Wars – voted against them at each not an auspicious time for a debating society based of the ‘No Confidence’ debates during the Attlee, on the high principle of free speech to be taking Wilson, and Callaghan administrations. Its early its first steps. A nervous Parliament had just passed enthusiasm for Mrs. Thatcher waned in 1981 but the Seditious Meetings Act – and the Union had the bounced back after the Falklands. A heavy defeat in temerity to vote against the new Habeas Corpus Michaelmas 1989 broke a three-year run of success. Suspension Act. Such behaviour was bound to attract The New Labour governments held the confidence of the attention of the authorities. On the night of 24 more recent generations with few exceptions – even March 1817, the University’s proctors burst into the invasion of Iraq, which the Union opposed from a Union meeting with a message from the Vicethe outset, doing little to shake its support. The present Chancellor demanding its dissolution and forbidding coalition – which has included three ex-Presidents the resumption of debates. The President in the among its Cabinets – has been defeated in every year chair that night, William Whewell, was a future of its existence with the exception of 2010. Vice-Chancellor himself. He rose with calm dignity: ‘Strangers will please to withdraw, and the House will take the message into consideration.’ News of the row

More extreme political views were aired in the 1930s. Two of the last Presidents before the Second World War became prominent Communists – Mohan Kumaramangalam (Michaelmas 1938) in India, and Pieter Keuneman (Michaelmas 1939) in Ceylon – while Michael Straight, the glamorous American Vice-President of the Union in Easter 1937, later spied for the KGB.

Some of the most heated rows down the centuries, however, have concerned the Union’s perpetually arcane electoral rules or navel-gazing issues, such the dress code for debates. Jack Ashley, the first workingclass President, caused uproar by not wearing black tie in Lent 1951, though he ‘was not standing on any great principle – I simply couldn’t afford an evening suit’.

The motion ‘This House prefers Fascism to Socialism’ was only defeated 335–218 in February 1933. Sir Oswald Mosley’s ‘scintillating performance’ and ‘magnificent oratory carried an enthusiastic House off its feet’ – but the debate was won by the calmer performance of a young Labour MP, Major C.R. Attlee.

The Union’s termly elections have provided 200 years of inventive procedural rows. Tam Dalyell’s third and final pitch for the presidency was thwarted by the drawing of billiard balls in the small hours of the morning. One of the most contentious elections of all, in Michaelmas 1961, pitted an American, Barry Augenbraun, against Brian Pollitt, son of the former general secretary of the British Communist Party, at the height of the Cold War. When the result was declared in the Union bar, BBC cameras were there to report it. But the result was soon declared void – the result of suspected canvassing – and the resulting byelection was won by John Gummer. When Pollitt ran again the following June, he was attacked in his rooms and briefly hospitalised – but won by a comfortable margin.

Mosley caused waves again in the 1950s and ’60s – particularly in 1961, when a young Ken Clarke decided to invite him to address the University Conservative Association for the second time in eighteen months. The Union hosted the meeting, which played a key role in the Society’s elections that term: Michael Howard resigned from the Conservative Association in protest, ran against Clarke for Secretary of the Union, and won. A ‘sit-in’ by more than a hundred students tried to stop Enoch Powell speaking at the Union in 1969, but this – alongside the Garden House Riot – was the closest Cambridge came to the spirit of the soixante-huitards. Protesters have, however, been a regular sight outside the Union – trying, for instance, to disrupt meetings with Jean-Marie Le Pen in 2003 and his daughter Marine ten years later. But on both occasions a packed chamber showed the Society’s disapproval far more effectively: with searching questions and free debate.

As the Union embarks on its third century, it seems unlikely to shy away from future controversy.

Booklet to celebrate the 200th anniversary of the Cambridge Union, featuring articles from former Officers and details about the Union's development plans. 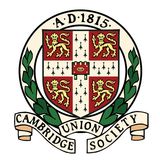