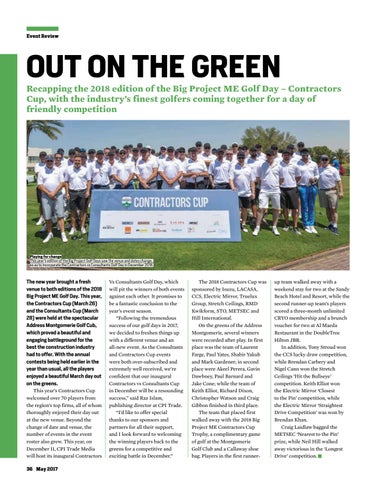 OUT ON THE GREEN

Recapping the 2018 edition of the Big Project ME Golf Day – Contractors Cup, with the industry’s finest golfers coming together for a day of friendly competition

Playing for change This year’s edition of the Big Project Golf Days saw the venue and dates change, so as to incorporate the Contractors vs Consultants Golf Day in December 2018.

The new year brought a fresh venue to both editions of the 2018 Big Project ME Golf Day. This year, the Contractors Cup (March 26) and the Consultants Cup (March 28) were held at the spectacular Address Montgomerie Golf Cub, which proved a beautiful and engaging battleground for the best the construction industry had to offer. With the annual contests being held earlier in the year than usual, all the players enjoyed a beautiful March day out on the greens. This year’s Contractors Cup welcomed over 70 players from the region’s top firms, all of whom thoroughly enjoyed their day out at the new venue. Beyond the change of date and venue, the number of events in the event roster also grew. This year, on December 11, CPI Trade Media will host its inaugural Contractors 36 May 2017

Vs Consultants Golf Day, which will pit the winners of both events against each other. It promises to be a fantastic conclusion to the year’s event season. “Following the tremendous success of our golf days in 2017, we decided to freshen things up with a different venue and an all-new event. As the Consultants and Contractors Cup events were both over-subscribed and extremely well received, we’re confident that our inaugural Contractors vs Consultants Cup in December will be a resounding success,” said Raz Islam, publishing director at CPI Trade. “I’d like to offer special thanks to our sponsors and partners for all their support, and I look forward to welcoming the winning players back to the greens for a competitive and exciting battle in December.”

The 2018 Contractors Cup was sponsored by Isuzu, LACASA, CCS, Electric Mirror, Truelux Group, Stretch Ceilings, RMD Kwikform, STO, METSEC and Hill International. On the greens of the Address Montgomerie, several winners were recorded after play. In first place was the team of Laurent Farge, Paul Yates, Shabir Yakub and Mark Gardener; in second place were Akeel Perera, Gavin Dawbney, Paul Barnard and Jake Cone; while the team of Keith Elliot, Richard Dixon, Christopher Watson and Craig Gibbon finished in third place. The team that placed first walked away with the 2018 Big Project ME Contractors Cup Trophy, a complimentary game of golf at the Montgomerie Golf Club and a Callaway shoe bag. Players in the first runner-

up team walked away with a weekend stay for two at the Sandy Beach Hotel and Resort, while the second runner-up team’s players scored a three-month unlimited CRYO membership and a brunch voucher for two at Al Maeda Restaurant in the DoubleTree Hilton JBR. In addition, Tony Stroud won the CCS lucky draw competition, while Brendan Carbery and Nigel Cann won the Stretch Ceilings ‘Hit the Bullseye’ competition. Keith Elliot won the Electric Mirror ‘Closest to the Pin’ competition, while the Electric Mirror ‘Straightest Drive Competition’ was won by Brendan Khan. Craig Laidlaw bagged the METSEC ‘Nearest to the Pin’ prize, while Neil Hill walked away victorious in the ‘Longest Drive’ competition.