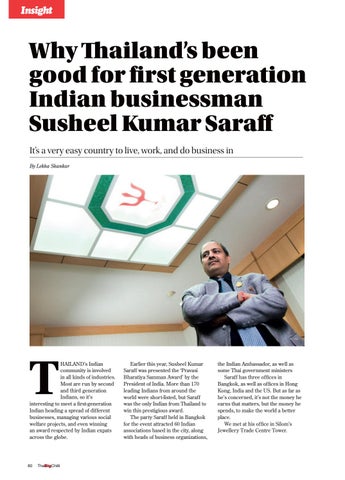 Why Thailand’s been good for first generation Indian businessman Susheel Kumar Saraff It’s a very easy country to live, work, and do business in By Lekha Shankar

HAILAND’s Indian community is involved in all kinds of industries. Most are run by second and third generation Indians, so it’s interesting to meet a first-generation Indian heading a spread of different businesses, managing various social welfare projects, and even winning an award respected by Indian expats across the globe.

Earlier this year, Susheel Kumar Saraff was presented the ‘Pravasi Bharatiya Samman Award’ by the President of India. More than 170 leading Indians from around the world were short-listed, but Saraff was the only Indian from Thailand to win this prestigious award. The party Saraff held in Bangkok for the event attracted 60 Indian associations based in the city, along with heads of business organizations,

the Indian Ambassador, as well as some Thai government ministers Saraff has three offices in Bangkok, as well as offices in Hong Kong, India and the US. But as far as he’s concerned, it’s not the money he earns that matters, but the money he spends, to make the world a better place. We met at his office in Silom’s Jewellery Trade Centre Tower. 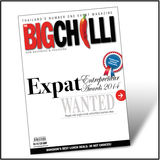 Thailand's best-read expat magazine. Find out what's hot in Bangkok and beyond. May 2017.

Thailand's best-read expat magazine. Find out what's hot in Bangkok and beyond. May 2017.