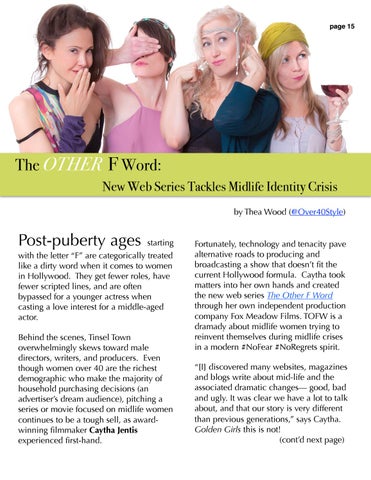 starting with the letter “F” are categorically treated like a dirty word when it comes to women in Hollywood. They get fewer roles, have fewer scripted lines, and are often bypassed for a younger actress when casting a love interest for a middle-aged actor. Behind the scenes, Tinsel Town overwhelmingly skews toward male directors, writers, and producers. Even though women over 40 are the richest demographic who make the majority of household purchasing decisions (an advertiser’s dream audience), pitching a series or movie focused on midlife women continues to be a tough sell, as awardwinning filmmaker Caytha Jentis experienced first-hand.

Fortunately, technology and tenacity pave alternative roads to producing and broadcasting a show that doesn’t fit the current Hollywood formula. Caytha took matters into her own hands and created the new web series The Other F Word through her own independent production company Fox Meadow Films. TOFW is a dramady about midlife women trying to reinvent themselves during midlife crises in a modern #NoFear #NoRegrets spirit. “[I] discovered many websites, magazines and blogs write about mid-life and the associated dramatic changes— good, bad and ugly. It was clear we have a lot to talk about, and that our story is very different than previous generations,” says Caytha. Golden Girls this is not! (cont’d next page)

Over-40 Emmy® nominees winning on camera & giving off camera. Tito's Handmade Vodka: Shaking Up Causes We Love. "Feel Good" round up of affordable fashion & beauty accessories. Brands that pay-it-forward and how we all can fix the fashion industry's tarnished reputation. 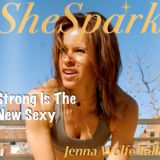