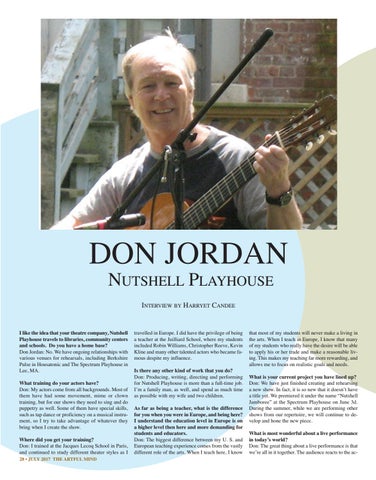 I like the idea that your theatre company, Nutshell Playhouse travels to libraries, community centers and schools. Do you have a home base? Don Jordan: No. We have ongoing relationships with various venues for rehearsals, including Berkshire Pulse in Housatonic and The Spectrum Playhouse in Lee, MA.

What training do your actors have? Don: My actors come from all backgrounds. Most of them have had some movement, mime or clown training, but for our shows they need to sing and do puppetry as well. Some of them have special skills, such as tap dance or proficiency on a musical instrument, so I try to take advantage of whatever they bring when I create the show.

Where did you get your training? Don: I trained at the Jacques Lecoq School in Paris, and continued to study different theater styles as I 28 • JULY 2017 THE ARTFUL MIND

travelled in Europe. I did have the privilege of being a teacher at the Juilliard School, where my students included Robin Williams, Christopher Reeve, Kevin Kline and many other talented actors who became famous despite my influence. Is there any other kind of work that you do? Don: Producing, writing, directing and performing for Nutshell Playhouse is more than a full-time job. I’m a family man, as well, and spend as much time as possible with my wife and two children.

As far as being a teacher, what is the difference for you when you were in Europe, and being here? I understand the education level in Europe is on a higher level then here and more demanding for students and educators. Don: The biggest difference between my U. S. and European teaching experience comes from the vastly different role of the arts. When I teach here, I know

that most of my students will never make a living in the arts. When I teach in Europe, I know that many of my students who really have the desire will be able to apply his or her trade and make a reasonable living. This makes my teaching far more rewarding, and allows me to focus on realistic goals and needs.

What is your current project you have lined up? Don: We have just finished creating and rehearsing a new show. In fact, it is so new that it doesn’t have a title yet. We premiered it under the name “Nutshell Jamboree” at the Spectrum Playhouse on June 3d. During the summer, while we are performing other shows from our repertoire, we will continue to develop and hone the new piece. What is most wonderful about a live performance in today’s world? Don: The great thing about a live performance is that we’re all in it together. The audience reacts to the ac- 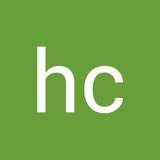