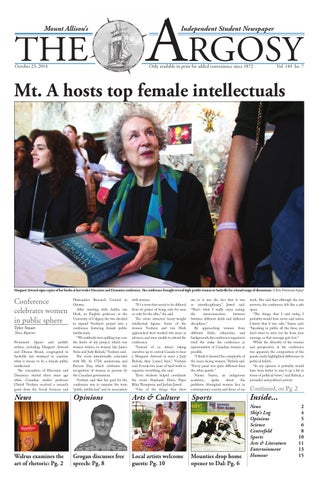 Only available in print for added convenience since 1872

Margaret Atwood signs copies of her books at last week’s Discourse and Dynamics conference. The conference brought several high-profile women to Sackville for a broad range of discussions. (Chris Donovan/Argosy)

Prominent figures and prolific writers, including Margaret Atwood and Dionne Brand, congregated in Sackville last weekend to examine what it means to be a female public intellectual. The conception of Discourse and Dynamics started three years ago when Canadian studies professor Christl Verduyn received a research grant from the Social Sciences and

Humanities Research Council in Ottawa. After meeting with Aritha van Herk, an English professor at the University of Calgary, the two decided to expand Verduyn’s project into a conference featuring female public intellectuals. “We suddenly were spilling way over the limits of my project, which was women writers, to women like Janice Stein and Judy Rebick,” Verduyn said. The event intentionally coincided with Mt. A’s 175th anniversary, and Persons Day, which celebrates the recognition of women as persons by the Canadian government. Verduyn said that her goal for the conference was to examine the term “public intellectual” and its association

with women. “It’s a term that needs to be diffused from its power of being only for men or only for the elite,” she said. The event attracted heavy-weight intellectual figures. Some of the women Verduyn and van Herk approached were booked two years in advance, and were unable to attend the conference. “Instead of us always taking ourselves up to central Canada to hear a Margaret Atwood or meet a Judy Rebick, they [came] here,” Verduyn said. It took two years of hard work to organize everything, she said. Three students helped coordinate the event: Stephanie Davis, Piper Riley Thompson, and Jeehan Jawed. “One of the things that drew

me to it was the fact that it was so interdisciplinary,” Jawed said. “That’s what I really enjoy seeing: the interconnection between between different fields and different disciplines.” By approaching women from different fields, ethnicities, and backgrounds, the conference organizers tried the make the conference as representative of Canadian women as possible. “I think it showed the complexity of the issues facing women,” Rebick said. “Every panel was quite different than the other panels.” Naomi Sayers, an indigenous academic, spoke about the problems Aboriginal women face in contemporary society, and those of sex

work. She said that although she was nervous, the conference felt like a safe space. “The things that I said today, I probably would have never said unless I knew that it was safe,” Sayers said. “Speaking in public all the time, you don’t want to steer too far from your message or that message gets lost.” While the diversity of the women and perspectives at the conference was apparent, the composition of the panels rarely highlighted differences in political beliefs. “In my opinion it probably would have been better to mix it up a bit in terms of political views,” said Rebick, a journalist and political activist. 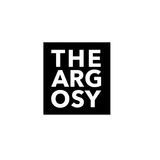