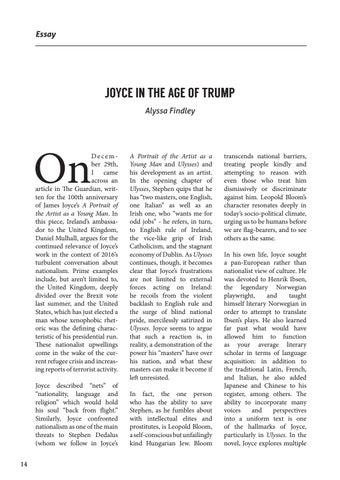 JOYCE IN THE AGE OF TRUMP Alyssa Findley

December 29th, I came across an article in The Guardian, written for the 100th anniversary of James Joyce’s A Portrait of the Artist as a Young Man. In this piece, Ireland’s ambassador to the United Kingdom, Daniel Mulhall, argues for the continued relevance of Joyce’s work in the context of 2016’s turbulent conversation about nationalism. Prime examples include, but aren’t limited to, the United Kingdom, deeply divided over the Brexit vote last summer, and the United States, which has just elected a man whose xenophobic rhetoric was the defining characteristic of his presidential run. These nationalist upwellings come in the wake of the current refugee crisis and increasing reports of terrorist activity. Joyce described “nets” of “nationality, language and religion” which would hold his soul “back from flight.” Similarly, Joyce confronted nationalism as one of the main threats to Stephen Dedalus (whom we follow in Joyce’s

A Portrait of the Artist as a Young Man and Ulysses) and his development as an artist. In the opening chapter of Ulysses, Stephen quips that he has “two masters, one English, one Italian” as well as an Irish one, who “wants me for odd jobs” - he refers, in turn, to English rule of Ireland, the vice-like grip of Irish Catholicism, and the stagnant economy of Dublin. As Ulysses continues, though, it becomes clear that Joyce’s frustrations are not limited to external forces acting on Ireland: he recoils from the violent backlash to English rule and the surge of blind national pride, mercilessly satirized in Ulysses. Joyce seems to argue that such a reaction is, in reality, a demonstration of the power his “masters” have over his nation, and what these masters can make it become if left unresisted. In fact, the one person who has the ability to save Stephen, as he fumbles about with intellectual elites and prostitutes, is Leopold Bloom, a self-conscious but unfailingly kind Hungarian Jew. Bloom

transcends national barriers, treating people kindly and attempting to reason with even those who treat him dismissively or discriminate against him. Leopold Bloom’s character resonates deeply in today’s socio-political climate, urging us to be humans before we are flag-bearers, and to see others as the same. In his own life, Joyce sought a pan-European rather than nationalist view of culture. He was devoted to Henrik Ibsen, the legendary Norwegian playwright, and taught himself literary Norwegian in order to attempt to translate Ibsen’s plays. He also learned far past what would have allowed him to function as your average literary scholar in terms of language acquisition: in addition to the traditional Latin, French, and Italian, he also added Japanese and Chinese to his register, among others. The ability to incorporate many voices and perspectives into a uniform text is one of the hallmarks of Joyce, particularly in Ulysses. In the novel, Joyce explores multiple 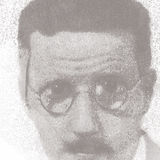