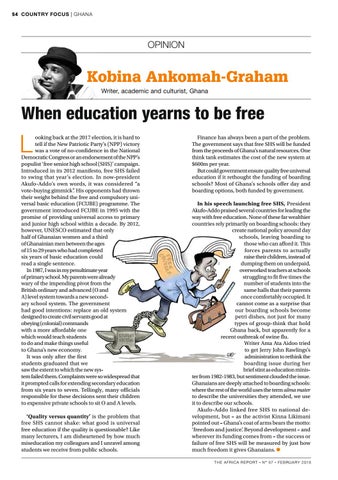 When education yearns to be free

ooking back at the 2017 election, it is hard to tell if the New Patriotic Party’s (NPP) victory was a vote of no-confidence in the National Democratic Congress or an endorsement of the NPP’s populist ‘free senior high school (SHS)’ campaign. Introduced in its 2012 manifesto, free SHS failed to swing that year’s election. In now-president Akufo-Addo’s own words, it was considered “a vote-buying gimmick”. His opponents had thrown their weight behind the free and compulsory universal basic education (FCUBE) programme. The government introduced FCUBE in 1995 with the promise of providing universal access to primary and junior high school within a decade. By 2012, however, UNESCO estimated that only half of Ghanaian women and a third of Ghanainian men between the ages of 15 to 29 years who had completed six years of basic education could read a single sentence. In 1987, I was in my penultimate year ofprimaryschool.Myparentswerealready wary of the impending pivot from the British ordinary and advanced (O and A) level system towards a new secondary school system. The government had good intentions: replace an old system designed to create civil servants good at obeying (colonial) commands with a more affordable one which would teach students to do and make things useful to Ghana’s new economy. It was only after the first students graduated that we saw the extent to which the new system failed them. Complaints were so widespread that it prompted calls for extending secondary education from six years to seven. Tellingly, many officials responsible for these decisions sent their children to expensive private schools to sit O and A levels. ‘Quality versus quantity’ is the problem that free SHS cannot shake: what good is universal free education if the quality is questionable? Like many lecturers, I am disheartened by how much miseducation my colleagues and I unravel among students we receive from public schools.

Finance has always been a part of the problem. The government says that free SHS will be funded from the proceeds of Ghana’s natural resources. One think tank estimates the cost of the new system at $600m per year. But could government ensure quality free universal education if it rethought the funding of boarding schools? Most of Ghana’s schools offer day and boarding options, both funded by government. In his speech launching free SHS, President Akufo-Addo praised several countries for leading the way with free education. None of these far wealthier countries rely primarily on boarding schools: they create national policy around day schools, leaving boarding to those who can afford it. This forces parents to actually raise their children, instead of dumping them on underpaid, overworked teachers at schools struggling to fit five times the number of students into the same halls that their parents once comfortably occupied. It cannot come as a surprise that our boarding schools become petri dishes, not just for many types of group-think that hold Ghana back, but apparently for a recent outbreak of swine flu. Writer Ama Ata Aidoo tried to get Jerry John Rawlings’s administration to rethink the boarding issue during her brief stint as education minister from 1982-1983, but sentiment clouded the issue. Ghanaians are deeply attached to boarding schools: where the rest of the world uses the term alma mater to describe the universities they attended, we use it to describe our schools. Akufo-Addo linked free SHS to national development, but – as the activist Kinna Likimani pointed out – Ghana’s coat of arms bears the motto: ‘freedom and justice’. Beyond development – and wherever its funding comes from – the success or failure of free SHS will be measured by just how much freedom it gives Ghanaians. THE AFRICA REPORT 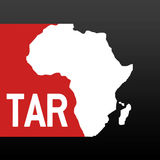