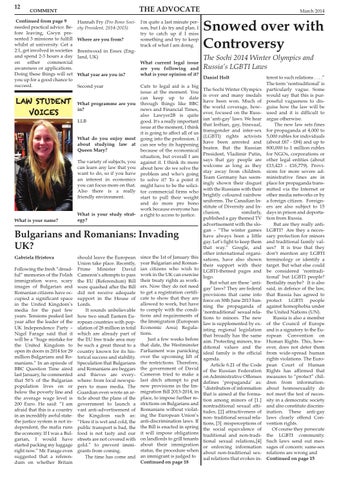 Continued from page 9 needed practical advice. Before leaving, Gwyn presented 3 missions to fulfill whilst at university. Get a 2:1, get involved in societies and spend 2-3 hours a day either commercial on awareness or applications. Doing these things will set you up for a good chance to succeed.

Hannah Fry (Pro Bono Soci- I&#39;m quite a last minute person, but I do try and plan. I ety President, 2014-2015) try to catch up if I miss something and try to keep Where are you from? track of what I am doing. Brentwood in Essex (England, UK) What current legal issue are you following and what is your opinion of it? What year are you in? Second year

What programme are you in? LLB

What do you enjoy most about studying law at Queen Mary?

The variety of subjects, you can learn any law that you want to do, so if you have an interest in economics you can focus more on that. Also there is a really friendly environment. What is your name?

What is your study strategy?

Cuts to legal aid is a big issue at the moment. You can keep up to date through things like BBC news and Financial Times, also Lawyer2B is quite good. It&#39;s a really important issue at the moment, I think it is going to affect all of us going into the profession. I can see why its happening because of the economical situation, but overall I am against it. I think its more about how do we solve the problem and who&#39;s going to solve it? To a point it might have to be the solicitor commercial firms who start to pull their weight and do more pro bono work because everyone has a right to access to justice.

Following the fresh “dreadful” memories of the Polish immigration wave, scary images of Bulgarian and Romanian citizens have occupied a significant space in the United Kingdom’s media for the past few years. Tensions peaked last year after the leader of the UK Independence Party – Nigel Farage said that it will be a “huge mistake for the United Kingdom to open its doors in 2014 for 29 million Bulgarians and Romanians.” In an episode of BBC Question Time aired last January, he commented that 50% of the Bulgarian population lives on or below the poverty line and the average wage level is 200 Euro. He said: “I am afraid that this is a country in an incredibly awful statethe justice system is not independent, the mafia runs the economy. If I was a Bulgarian, I would have started packing my luggage right now.” Mr. Farage even suggested that a referendum on whether Britain

should leave the European Union take place. Recently, Prime Minister David Cameron’s attempts to pass the EU (Referendum) Bill were quashed after the Bill did not receive adequate support in the House of Lords. It sounds unbelievable how two small Eastern European countries with population of 28 million in total which are already part of the EU free trade area may be such a great threat to a country known for its historical success and stability. Speculation that Bulgarians and Romanians are beggars and thieves are everywhere: from local newspapers to mass media. The Guardian even wrote an article about the plans of the government to launch a vast anti-advertisement of the Kingdom such as: “Here it is wet and cold, the public transport is bad, the food is not tasty and our streets are not covered with gold.” to prevent immigrants from coming. The time has come and

since the 1st of January this year Bulgarian and Romanian citizens who wish to work in the UK can exercise their treaty rights as workers. Now they do not need to get a registration certificate to show that they are allowed to work, but have to comply with the conditions and requirements of the Immigration (European Economic Area) Regulations. Just a few weeks before that date, the Westminster Parliament was panicking over the upcoming lift of the restrictions. Therefore, the government of David Cameron tried to make a last ditch attempt to put new provisions in the Immigration Bill 2013-2014, in place, to impose further restrictions on Bulgarians and Romanians without violating the European Union’s anti-discrimination laws. If the Bill is enacted in spring it will impose obligations on landlords to grill tenants about their immigration status, the procedure when an immigrant is judged to Continued on page 18

Snowed over with Controversy

The Sochi Winter Olympics is over and many medals have been won. Much of the world coverage, however, focused on the Russian ‘anti-gay’ laws. We hear that lesbian, gay, bisexual, transgender and inter-sex (LGBTI) rights activists have been arrested and beaten. But the Russian President, Vladimir Putin, says that gay people are welcome as long as they stay away from children. Team Germany has seemingly shown their disgust with the Russians with their brightly coloured rainbow uniforms. The Canadian Institute of Diversity and Inclusion, similarly, published a gay themed TV advertisement with the slogan – “The winter games have always been a little gay. Let’s fight to keep them that way.” Google, and other international organisations, have also shown their support with their LGBTI-themed pages and logo. But what are these ‘antigay’ laws? They are federal provisions that came into force on 30th June 2013 banning the propaganda of ‘nontraditional’ sexual relations to minors. The new law is supplemented by existing regional legislation that broadly has the same aim. Protecting minors, traditional values and the ideal family is the official agenda. Article 6.21 of the Code of the Russian Federation on Administrative Offenses defines ‘propaganda’ as: “distribution of information that is aimed at the formation among minors of [1.] nontraditional sexual attitudes, [2] attractiveness of non- traditional sexual relations, [3] misperceptions of the social equivalence of traditional and non-traditional sexual relations,[4] or enforcing information about non-traditional sexual relations that evokes in-

terest to such relations . . . .” The term ‘nontraditional’ is particularly vague. Some would say that this is purposeful vagueness to disguise how the law will be used and it is difficult to argue otherwise. The new law sets fines for propaganda at 4,000 to 5,000 rubles for individuals (about £67 - £84) and up to 800,000 to 1 million rubles for NGOs, corporations or other legal entities (about £13,423 - £16,779). Provisions for more severe administrative fines are in place for propaganda transmitted via the Internet or other media networks or by a foreign citizen. Foreigners are also subject to 15 days in prison and deportation from Russia. But are they really antiLGBTI? Are they a necessary protection for minors and traditional family values? It is true that they don’t mention any LGBTI terminology or identify a target. But what else could be considered ‘nontraditional’ but LGBTI people? Bestiality maybe? It is also said, in defence of the law, that Russia has agreed to protect LGBTI people against homophobia under the United Nations (UN). Russia is also a member of the Council of Europe and is a signatory to the European Convention on Human Rights. This, however, does not deter them from wide-spread human rights violations. The European Court of Human Rights has affirmed that measures to “protect” children from informationabout homosexuality do not meet the test of necessity in a democratic society and also constitute discrimination. These anti-gay laws clearly offend Convention rights. Of course they persecute the LGBTI community. Such laws send out messages of concern: same-sex relations are wrong and Continued on page 15

This 20-page colour issue of The Advocate is the first printed in A4-size. It contains a range of articles written by Queen Mary law students, lecturers and external contributors. 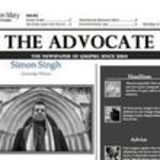