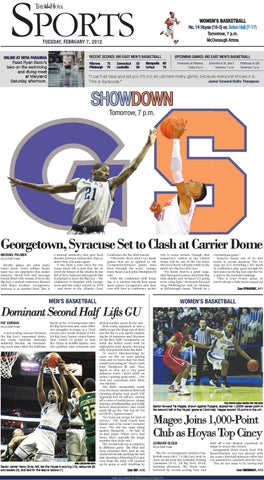 “I can’t sit here and tell you it’s not an ultimate rivalry game, because everyone knows it is. Junior forward Hollis Thompson This is Syracuse.”

Rivalry games are what make teams great. Every college hoops team has one opponent that makes students’ blood boil and message boards flood with venom. Even in the Big East, a storied conference littered with fierce rivalries, GeorgetownSyracuse is at another level. This is

a mutual animosity that goes back decades between universities that sit more than 350 miles apart. It has been a year since the two teams faced off, a year that has altered the future of the rivalry. In the fall of 2011, Syracuse announced that it planned to leave the Big East — the conference it founded with Georgetown and five other schools in 1979 — and move to the Atlantic Coast

Conference for the 2014 season. “Obviously there aren’t too many games that are as spirited as the Georgetown-Syracuse games have been through the years,” Georgetown Head Coach John Thompson III said. With the conference shift looming, it is unclear exactly how many more games Georgetown and Syracuse will have as conference archri-

vals. It seems certain, though, that tomorrow’s contest at the Carrier Dome will be one of the last times the two schools will play while in the midst of a Big East title race. “We know they’re a good team, they have good scorers, they have bigtime players and we know it’s going to be a dog fight,” freshman forward Greg Whittington said on Monday at McDonough Arena. “Should be a

dished out five assists in the win. Both teams appeared to take a while to get the sleep out of their eyes for the 11 a.m. tipoff, combining for 16 turnovers and 38 points in the first half. Georgetown entered the locker room with an eight-point lead, despite shooting only 34.8 percent from the field. “It wasn’t [disconcerting] because we felt we were getting stops and we knew that the shots would start going in,” Head Coach John Thompson III said. “Inasmuch as they are a very good defensive team, I don’t think we weren’t getting good looks. ... We were not concerned with offensive rhythm.” The Bulls, meanwhile, made even the Hoyas’ mediocre first-half shooting display look good. USF appeared lost on offense, reeling off a series of awful passes, sloppy displays of ballhandlng and badly missed three-pointers that could easily fill up the “Not Top 10” list on ESPN’s “SportsCenter.” “It’s been our recipe for lack of success,” USF Head Coach Stan Heath said of his team’s turnover woes. “We did the same thing against Marquette — we had 22 in that game. When we’ve had losses, that’s typically the magic number that sticks out.” The second half was a completely different game. The Blue and Gray extended their lead by uncharacteristically pushing the ball and shooting a blistering 65.2 percent from the field. USF cleaned up its game as well, doubling its See USF, A10

run-and-gun game.” Syracuse boasts one of its best teams in recent memory. The Orange are 23-1, including a 10-1 mark in conference play, good enough for first place in the Big East and the No. 2 spot in the national rankings. “This is your rivalry game, so you’re always a little more amped up

Senior forward Tia Magee, shown against Rutgers, scored her 1,000th career point in the second half of the Hoyas’ game at Cincinnati. Magee scored 18 points in the win.

Visit us online at thehoya.com/sports

held off a late Bearcat comeback attempt to secure the victory. Georgetown Head Coach Terri Williams-Flournoy was not pleased with the team’s first-half defensive effort but was nonetheless satisfied with the win. “You do not want to be having bad See CINCINNATI, A10 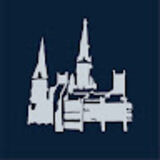