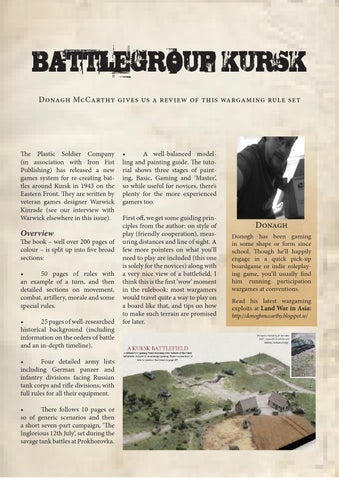 The Plastic Soldier Company (in association with Iron Fist Publishing) has released a new games system for re-creating battles around Kursk in 1943 on the Eastern Front. They are written by veteran games designer Warwick Kinrade (see our interview with Warwick elsewhere in this issue).

The book – well over 200 pages of colour – is split up into five broad sections: • 50 pages of rules with an example of a turn, and then detailed sections on movement, combat, artillery, morale and some special rules. • 25 pages of well-researched historical background (including information on the orders of battle and an in-depth timeline). • Four detailed army lists including German panzer and infantry divisions facing Russian tank corps and rifle divisions, with full rules for all their equipment. • There follows 10 pages or so of generic scenarios and then a short seven-part campaign, ‘The Inglorious 12th July’, set during the savage tank battles at Prokhorovka.

• A well-balanced modelling and painting guide. The tutorial shows three stages of painting, Basic, Gaming and ‘Master’, so while useful for novices, there’s plenty for the more experienced gamers too. First off, we get some guiding principles from the author: on style of play (friendly cooperation), measuring distances and line of sight. A few more pointers on what you’ll need to play are included (this one is solely for the novices) along with a very nice view of a battlefield. I think this is the first ‘wow’ moment in the rulebook: most wargamers would travel quite a way to play on a board like that, and tips on how to make such terrain are promised for later.

Donagh Donogh has been gaming in some shape or form since school. Though he’ll happily engage in a quick pick-up boardgame or indie roleplaying game, you’ll usually find him running participation wargames at conventions. Read his latest wargaming exploits at Land War in Asia: http://donoghmccarthy.blogspot.ie/

The Gazebo is a free, quarterly e-zine dedicated to gaming in the UK and Ireland. 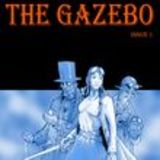