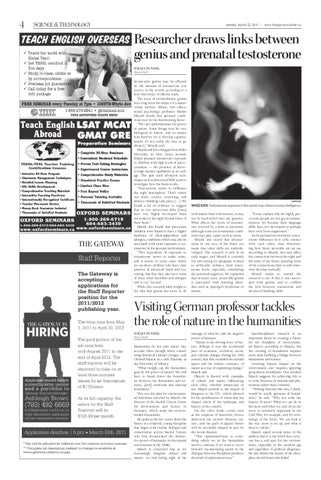 Savant-style genius may be affected by the amount of testosterone you receive in the womb, according to a new University of Alberta study. The roots of extraordinary genius have long been the subject of a nature versus nurture debate, but educational psychology professor Martin Mrazik thinks that prenatal conditions may be the determining factor. “We can’t underestimate the power of nature. Some things may be very biological in nature, and no matter how hard we try to develop a genius, maybe it’s not really the way to go about it,” Mrazik said. Mrazik and his colleague from Rider University in New Jersey recently linked prenatal testosterone exposure to children with high levels of precociousness — the presence of aboveaverage mental capabilities at an early age. The pair used advanced techniques such as functional MRI scans to investigate how the brain works. “Testosterone seems to influence the right hemisphere. That’s where our math, science, reasoning, and abstract thinking take place […] We found a lot of evidence to suggest that in very precocious kids, [they] have very highly developed brain networks in the right frontal lobes of their brain.” Mrazik also found that precocious children were found to have a higher incidence of short-sightedness and allergies, conditions which may also be associated with more exposure to testosterone in the prenatal environment. “This hypothesis of exposure to testosterone seems to make sense, and it seems in some cases where we see these children who have clear patterns of advanced math and reasoning, but that they also have some of these other disorders and allergies and so on,” he said. While this research adds weight to the idea that genius has more to do

with nature than with nurture, it may not be hard-wired into our genetics. What affects the levels of testosterone received by a fetus is uncertain, although some environmental conditions may play a part, such as stress. Mrazik also noted that advancement in one area of the brain can mean that other skills are underdeveloped. The research is still in its early stages, and Mrazik is certainly not advocating for pregnant women to artificially enhance their testosterone levels, especially considering the potential negatives. He explained that in many cases, savant-like genius is associated with learning disorders such as Asperger’s Syndrome or autism.

“It may explain why the highly precocious people are not good communicators. It’s because their language skills have not developed or perhaps have even been suppressed.” In the prenatal environment, testosterone influences how cells connect with each other, thus determining how brain networks are set up. According to Mrazik, this may affect the connection between the right and left sides of the brain, pruning more of the connections than would otherwise develop normally. Mrazik wants to extend the research to see if this is also associated with genius, and to confirm the link between testosterone and advanced thinking skills.

Humanities do not take nature into account often enough when considering historical cultural changes, said Christof Mauch in a talk Thursday at the University of Alberta. “What insight can the humanities gain by the power of nature? We will have to break down the boundaries between the humanities and sciences, [and] territorial and national boundaries.” This was the plan for environmental historians unveiled by Mauch, the director of the Rachel Carson Centre for Environment and Society in Germany, which study the environmental humanities. He spoke at the law centre about the future of a relatively young discipline that began with marine biologist and conservation activist Rachel Carson, who first documented the destructive power of humanity on the natural environment in the 1960s. Mauch is concerned that as we increasingly integrate culture and nature, we risk losing sight of the

message of what he calls the negative power of humans. “Nature is the driving force of history. Perhaps it was the accelerated pace of economic, technical, social, and cultural changes during the 19th century that first excluded the natural aspect and the relative constancy of nature as a way of explaining change,” Mauch said. History is littered with examples of culture and nature influencing each other, whether intentional or not. Mauch pointed to the import of bluegrass to the U.S., which allowed for the proliferation of wheat that has shaped much of the landscape and history of the country. On the other hand, events such as the eruption of Santorini, Greece destroyed the ancient Minoan culture, and the path of Japan’s future will be inevitably shaped in part by the recent disaster. “This opinionated-ness is something which we in the humanities need to cultivate if we want to move forward. Incorporating nature in the dialogue between disciplines produces this kind of opinionated-ness.”

Interdisciplinary research is an important factor in creating a future for the discipline of environmental history according to Mauch, but the crossing of boundaries requires more than building a bridge between humanities and science. Assessing human impact on the environment also requires ignoring geopolitical boundaries. One method Mauch suggests for achieving this is to write histories of animals and phenomena rather than countries. “Writing histories like this, I think, would be totally ignorant of boundaries,” he said. “Why not write the history of snow? What we can do in the snow and what we can’t do in the snow is extremely important in the Cold War, for example, and for technology of the Arctic. We can look at the way snow is set up and what it does to culture.” Mauch stated several times in his address that it is his belief that everyone has a soft spot for the environment, especially in the modern age and regardless of political allegiance. He also thinks the future of the discipline should foster this belief. 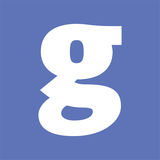