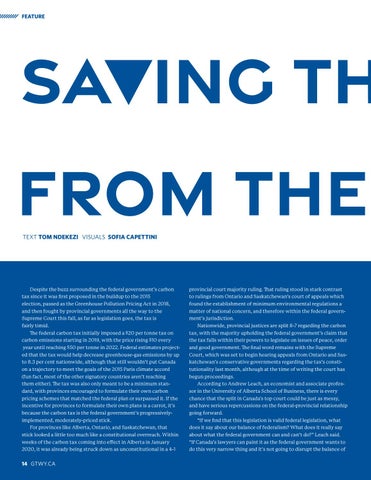 Despite the buzz surrounding the federal government’s carbon tax since it was first proposed in the buildup to the 2015 election, passed as the Greenhouse Pollution Pricing Act in 2018, and then fought by provincial governments all the way to the Supreme Court this fall, as far as legislation goes, the tax is fairly timid. The federal carbon tax initially imposed a $20 per tonne tax on carbon emissions starting in 2019, with the price rising $10 every year until reaching $50 per tonne in 2022. Federal estimates projected that the tax would help decrease greenhouse-gas emissions by up to 8.3 per cent nationwide, although that still wouldn’t put Canada on a trajectory to meet the goals of the 2015 Paris climate accord (fun fact, most of the other signatory countries aren’t reaching them either). The tax was also only meant to be a minimum standard, with provinces encouraged to formulate their own carbon pricing schemes that matched the federal plan or surpassed it. If the incentive for provinces to formulate their own plans is a carrot, it’s because the carbon tax is the federal government’s progressivelyimplemented, moderately-priced stick. For provinces like Alberta, Ontario, and Saskatchewan, that stick looked a little too much like a constitutional overreach. Within weeks of the carbon tax coming into effect in Alberta in January 2020, it was already being struck down as unconstitutional in a 4-1

provincial court majority ruling. That ruling stood in stark contrast to rulings from Ontario and Saskatchewan’s court of appeals which found the establishment of minimum environmental regulations a matter of national concern, and therefore within the federal government’s jurisdiction. Nationwide, provincial justices are split 8-7 regarding the carbon tax, with the majority upholding the federal government’s claim that the tax falls within their powers to legislate on issues of peace, order and good government. The final word remains with the Supreme Court, which was set to begin hearing appeals from Ontario and Saskatchewan’s conservative governments regarding the tax’s constitutionality last month, although at the time of writing the court has begun proceedings. According to Andrew Leach, an economist and associate professor in the University of Alberta School of Business, there is every chance that the split in Canada's top court could be just as messy, and have serious repercussions on the federal-provincial relationship going forward. “If we find that this legislation is valid federal legislation, what does it say about our balance of federalism? What does it really say about what the federal government can and can’t do?” Leach said. “If Canada’s lawyers can paint it as the federal government wants to do this very narrow thing and it’s not going to disrupt the balance of