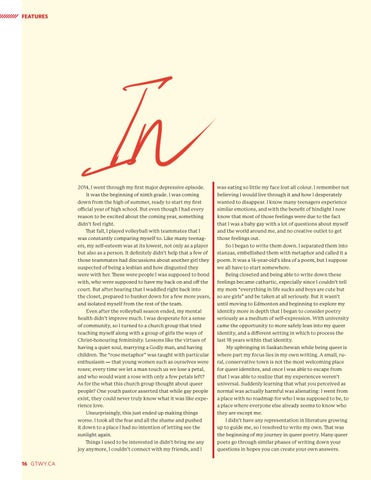 2014, I went through my first major depressive episode. It was the beginning of ninth grade. I was coming down from the high of summer, ready to start my first official year of high school. But even though I had every reason to be excited about the coming year, something didn’t feel right. That fall, I played volleyball with teammates that I was constantly comparing myself to. Like many teenagers, my self-esteem was at its lowest, not only as a player but also as a person. It definitely didn’t help that a few of those teammates had discussions about another girl they suspected of being a lesbian and how disgusted they were with her. These were people I was supposed to bond with, who were supposed to have my back on and off the court. But after hearing that I waddled right back into the closet, prepared to hunker down for a few more years, and isolated myself from the rest of the team. Even after the volleyball season ended, my mental health didn’t improve much. I was desperate for a sense of community, so I turned to a church group that tried teaching myself along with a group of girls the ways of Christ-honouring femininity. Lessons like the virtues of having a quiet soul, marrying a Godly man, and having children. The “rose metaphor” was taught with particular enthusiasm — that young women such as ourselves were roses; every time we let a man touch us we lose a petal, and who would want a rose with only a few petals left? As for the what this church group thought about queer people? One youth pastor asserted that while gay people exist, they could never truly know what it was like experience love. Unsurprisingly, this just ended up making things worse. I took all the fear and all the shame and pushed it down to a place I had no intention of letting see the sunlight again. Things I used to be interested in didn’t bring me any joy anymore, I couldn’t connect with my friends, and I

was eating so little my face lost all colour. I remember not believing I would live through it and how I desperately wanted to disappear. I know many teenagers experience similar emotions, and with the benefit of hindight I now know that most of those feelings were due to the fact that I was a baby gay with a lot of questions about myself and the world around me, and no creative outlet to get those feelings out. So I began to write them down. I separated them into stanzas, embellished them with metaphor and called it a poem. It was a 14-year-old’s idea of a poem, but I suppose we all have to start somewhere. Being closeted and being able to write down these feelings became cathartic, especially since I couldn’t tell my mom “everything in life sucks and boys are cute but so are girls” and be taken at all seriously. But it wasn’t until moving to Edmonton and beginning to explore my identity more in depth that I began to consider poetry seriously as a medium of self-expression. With university came the opportunity to more safely lean into my queer identity, and a different setting in which to process the last 18 years within that identity. My upbringing in Saskatchewan while being queer is where part my focus lies in my own writing. A small, rural, conservative town is not the most welcoming place for queer identites, and once I was able to escape from that I was able to realize that my experiences weren’t universal. Suddenly learning that what you perceived as normal was actually harmful was alienating: I went from a place with no roadmap for who I was supposed to be, to a place where everyone else already seems to know who they are except me. I didn’t have any representation in literature growing up to guide me, so I resolved to write my own. That was the beginning of my journey in queer poetry. Many queer poets go through similar phases of writing down your questions in hopes you can create your own answers.