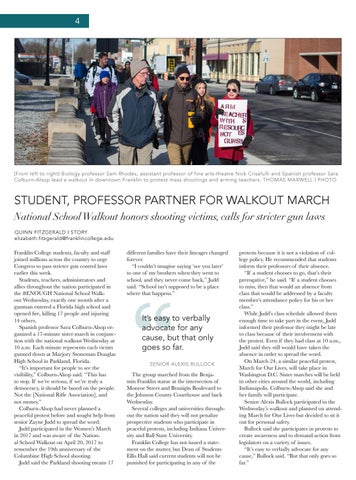 Franklin College students, faculty and staff joined millions across the country to urge Congress to pass stricter gun control laws earlier this week. Students, teachers, administrators and allies throughout the nation participated in the #ENOUGH National School Walkout Wednesday, exactly one month after a gunman entered a Florida high school and opened fire, killing 17 people and injuring 14 others. Spanish professor Sara Colburn-Alsop organized a 17-minute sister march in conjunction with the national walkout Wednesday at 10 a.m. Each minute represents each victim gunned down at Marjory Stoneman Douglas High School in Parkland, Florida. “It’s important for people to see the visibility,” Colburn-Alsop said. “This has to stop. If we’re serious, if we’re truly a democracy, it should be based on the people. Not the [National Rifle Association], and not money.” Colburn-Alsop had never planned a peaceful protest before and sought help from senior Zayne Judd to spread the word. Judd participated in the Women’s March in 2017 and was aware of the National School Walkout on April 20, 2017 to remember the 19th anniversary of the Columbine High School shooting. Judd said the Parkland shooting means 17

different families have their lineages changed forever. “I couldn’t imagine saying ‘see you later’ to one of my brothers when they went to school, and they never come back,” Judd said. “School isn’t supposed to be a place where that happens.”

It’s easy to verbally advocate for any cause, but that only goes so far. SENIOR ALEXIS BULLOCK

The group marched from the Benjamin Franklin statue at the intersection of Monroe Street and Branigin Boulevard to the Johnson County Courthouse and back Wednesday. Several colleges and universities throughout the nation said they will not penalize prospective students who participate in peaceful protests, including Indiana University and Ball State University. Franklin College has not issued a statement on the matter, but Dean of Students Ellis Hall said current students will not be punished for participating in any of the

protests because it is not a violation of college policy. He recommended that students inform their professors of their absence. “If a student chooses to go, that’s their prerogative,” he said. “If a student chooses to miss, then that would an absence from class that would be addressed by a faculty member’s attendance policy for his or her class.” While Judd’s class schedule allowed them enough time to take part in the event, Judd informed their professor they might be late to class because of their involvement with the protest. Even if they had class at 10 a.m., Judd said they still would have taken the absence in order to spread the word. On March 24, a similar peaceful protest, March for Our Lives, will take place in Washington D.C. Sister marches will be held in other cities around the world, including Indianapolis. Colburn-Alsop said she and her family will participate. Senior Alexis Bullock participated in the Wednesday’s walkout and planned on attending March for Our Lives but decided to sit it out for personal safety. Bullock said she participates in protests to create awareness and to demand action from legislators on a variety of issues. “It’s easy to verbally advocate for any cause,” Bullock said. “But that only goes so far.”