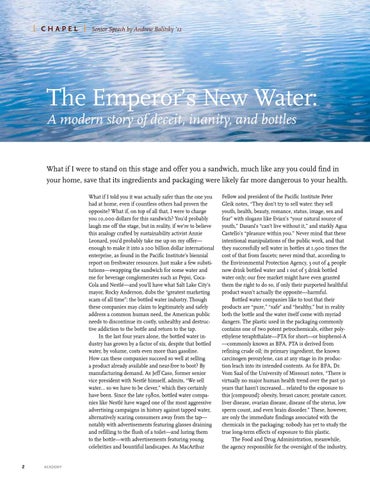 The Emperor’s New Water: A modern story of deceit, inanity, and bottles

What if I were to stand on this stage and offer you a sandwich, much like any you could find in your home, save that its ingredients and packaging were likely far more dangerous to your health. What if I told you it was actually safer than the one you had at home, even if countless others had proven the opposite? What if, on top of all that, I were to charge you 10,000 dollars for this sandwich? You’d probably laugh me off the stage, but in reality, if we’re to believe this analogy crafted by sustainability activist Annie Leonard, you’d probably take me up on my offer— enough to make it into a 100 billion dollar international enterprise, as found in the Pacific Institute’s biennial report on freshwater resources. Just make a few substitutions—swapping the sandwich for some water and me for beverage conglomerates such as Pepsi, CocaCola and Nestlé—and you’ll have what Salt Lake City’s mayor, Rocky Anderson, dubs the “greatest marketing scam of all time”: the bottled water industry. Though these companies may claim to legitimately and safely address a common human need, the American public needs to discontinue its costly, unhealthy and destructive addiction to the bottle and return to the tap. In the last four years alone, the bottled water industry has grown by a factor of six, despite that bottled water, by volume, costs even more than gasoline. How can these companies succeed so well at selling a product already available and near-free to boot? By manufacturing demand. As Jeff Caso, former senior vice president with Nestlé himself, admits, “We sell water… so we have to be clever,” which they certainly have been. Since the late 1980s, bottled water companies like Nestlé have waged one of the most aggressive advertising campaigns in history against tapped water, alternatively scaring consumers away from the tap— notably with advertisements featuring glasses draining and refilling to the flush of a toilet—and luring them to the bottle—with advertisements featuring young celebrities and bountiful landscapes. As MacArthur

Fellow and president of the Pacific Institute Peter Gleik notes, “They don’t try to sell water: they sell youth, health, beauty, romance, status, image, sex and fear” with slogans like Evian’s “your natural source of youth,” Dasani’s “can’t live without it,” and starkly Agua Castello’s “pleasure within you.” Never mind that these intentional manipulations of the public work, and that they successfully sell water in bottles at 1,900 times the cost of that from faucets; never mind that, according to the Environmental Protection Agency, 3 out of 4 people now drink bottled water and 1 out of 5 drink bottled water only; our free market might have even granted them the right to do so, if only their purported healthful product wasn’t actually the opposite—harmful. Bottled water companies like to tout that their products are “pure,” “safe” and “healthy,” but in reality both the bottle and the water itself come with myriad dangers. The plastic used in the packaging commonly contains one of two potent petrochemicals, either polyethylene teraphthalate—PTA for short—or bisphenol‑A —commonly known as BPA. PTA is derived from refining crude oil; its primary ingredient, the known carcinogen perozylene, can at any stage in its production leach into its intended contents. As for BPA, Dr. Vom Saal of the University of Missouri notes, “There is virtually no major human health trend over the past 30 years that hasn’t increased… related to the exposure to this [compound]: obesity, breast cancer, prostate cancer, liver disease, ovarian disease, disease of the uterus, low sperm count, and even brain disorder.” These, however, are only the immediate findings associated with the chemicals in the packaging; nobody has yet to study the true long-term effects of exposure to this plastic. The Food and Drug Administration, meanwhile, the agency responsible for the oversight of the industry,