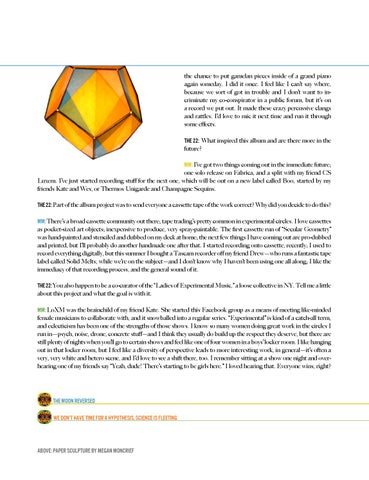 the chance to put gamelan pieces inside of a grand piano again someday. I did it once. I feel like I can’t say where, because we sort of got in trouble and I don’t want to incriminate my co-conspirator in a public forum, but it’s on a record we put out. It made these crazy percussive clangs and rattles. I’d love to mic it next time and run it through some effects. THE 22: What inspired this album and are there more in the future? MM: I’ve got two things coming out in the immediate future; one solo release on Fabrica, and a split with my friend CS Luxem. I’ve just started recording stuff for the next one, which will be out on a new label called Boo, started by my friends Kate and Wes, or Thermos Unigarde and Champagne Sequins. THE 22: Part of the album project was to send everyone a cassette tape of the work correct? Why did you decide to do this? MM: There’s a broad cassette community out there; tape trading’s pretty common in experimental circles. I love cassettes as pocket-sized art objects; inexpensive to produce, very spray-paintable. The first cassette run of “Secular Geometry” was hand-painted and stenciled and dubbed on my deck at home; the next few things I have coming out are pro-dubbed and printed, but I’ll probably do another handmade one after that. I started recording onto cassette, recently; I used to record everything digitally, but this summer I bought a Tascam recorder off my friend Drew—who runs a fantastic tape label called Solid Melts, while we’re on the subject—and I don’t know why I haven’t been using one all along; I like the immediacy of that recording process, and the general sound of it. THE 22: You also happen to be a co-curator of the “Ladies of Experimental Music,” a loose collective in NY. Tell me a little about this project and what the goal is with it. MM: LoXM was the brainchild of my friend Kate. She started this Facebook group as a means of meeting like-minded female musicians to collaborate with, and it snowballed into a regular series. “Experimental” is kind of a catch-all term, and eclecticism has been one of the strengths of those shows. I know so many women doing great work in the circles I run in—psych, noise, drone, concrete stuff—and I think they usually do build up the respect they deserve, but there are still plenty of nights when you’ll go to certain shows and feel like one of four women in a boys’ locker room. I like hanging out in that locker room, but I feel like a diversity of perspective leads to more interesting work, in general—it’s often a very, very white and hetero scene, and I’d love to see a shift there, too. I remember sitting at a show one night and overhearing one of my friends say “Yeah, dude! There’s starting to be girls here.” I loved hearing that. Everyone wins, right?

THE MOON REVERSED we don’t have time for a hypothesis, science is fleeting

ABOVE: PAPER SCULPTURE BY MEGAN MONCRIEF 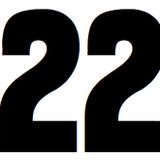