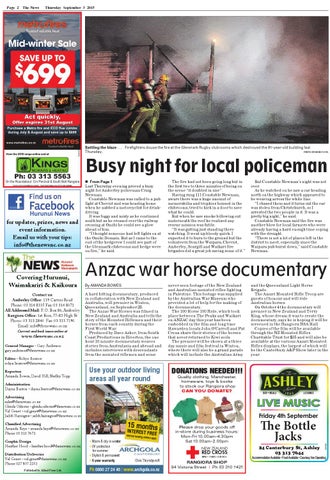 Hurunui News for updates, prizes, news and event information. Email us with your tips: info@thenewsnc.co.nz

Busy night for local policeman From Page 1 Last Thursday evening proved a busy night for Amberley policeman Craig Newman. Constable Newman was called to a pub fight at Cheviot and was heading home when he nabbed a motorcyclist for drink­ driving. It was foggy and misty as he continued south but as he crossed over the railway crossing at Omihi he could see a glow ahead of him. ‘‘I thought someone had left lights on at the Omihi Domain. But as I came to the end of the hedgerow I could see part of the Glenmark clubrooms and hedge were on fire,’’ he said.

The fire had not been going long but in the first two to three minutes of being on the scene ‘‘it doubled in size’’. Having rung 111 Constable Newman, aware there was a huge amount of memorabilia and trophies housed in the clubrooms, tried to kick in a door to save what he could. But when he saw smoke billowing out underneath the roof he realised any rescue mission was futile. ‘‘It was gutting just standing there watching. It went up bloody quick. I expected it to burn to the ground but the volunteers from the Waipara, Cheviot, Amberley, Scargill and Waikari fire brigades did a great job saving some of it.’’

Anzac war horse documentary By AMANDA BOWES A hard hitting documentary, produced in collaboration with New Zealand and Australia, will premier in Winton, Queensland, on September 25. The Anzac War Horses was filmed in New Zealand and Australia and tells the story of the Mounted Riflemen and their horses from each country during the First World War. Produced by Dave Asher, from South Coast Productions in Riverton, the one hour 10 minute documentary weaves stories from Australasia and abroad and includes interviews with descendants from the mounted riflemen and some

Use your outdoor living areas all year round

never seen footage of the New Zealand and Australian mounted rifles fighting in Palestine. This footage was supplied by the Australian War Museum who provided a lot of help for the making of the documentary. The 100 Horse 100 Ride, which took place between The Peaks and Waikari on ANZAC day this year has been embedded in the film and long time Hawarden locals John O’Carroll and Pat Crean share their stories of the horses that never returned to Kiwi soils. The premier will be shown at a three day music and film festival in Winton, where there will also be a grand parade which will include the Australian Army

and the Queensland Light Horse Brigade. The Amuri Mounted Rifle Troop are guests of honour and will ride Australian horses. On October 4 the documentary will premier in New Zealand and Terry King, whose dream it was to create the documentary, says he is hoping it will be screened in the Rangiora RSA Hall. Copies of the film will be available through the NZ Mounted Rifles Charitable Trust for $35 and will also be available at the various Amuri Mounted Rifles displays, the largest of which will be the Canterbury A&amp;P Show later in the year.

But Constable Newman’s night was not over. As he watched on he saw a car heading north on the highway which appeared to be weaving across the white line. ‘‘I chased them and it turns out the car was stolen from Christchurch, so I arrested the two people in it. It was a pretty big night,’’ he said. Constable Newman said the fire was another blow for local farmers who were already having a hard enough time coping with the drought. ‘‘There is not a lot of places left in the district to meet, especially since the Waipara pub burnt down,’’ said Constable Newman.

Purchase a Metro fire and ECO flue combo during July &amp; August and save up to $699