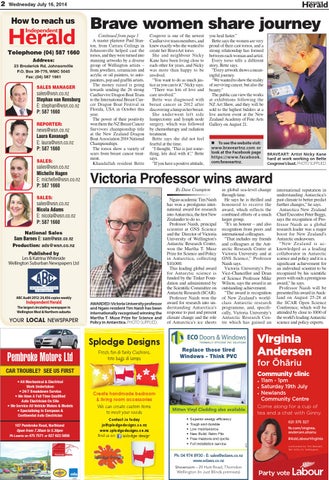 How to reach us

Brave women share journey Continued from page 1 A master plasterer Paul Stanton, from Carrara Ceilings in Johnsonville helped cast the torsos, and they were turned into stunning artworks by a diverse group of Wellington artists – from jewellers, ceramicists and acrylic or oil painters, to autopainters, pop and graffiti artists. The money raised is going towards sending the 26 strong CanSurvive Dragon Boat Team to the International Breast Cancer Dragon Boat Festival in Florida, USA in October this year. The power of their positivity won them the NZ Breast Cancer Survivors championship title at the New Zealand Dragon Boat Association 2014 National Championships. The torsos show a variety of scars from breast cancer treatment. Khandallah resident Bette

Cosgrove is one of the newest CanSurvive team members, and knew exactly who she wanted to create her BraveArt torso. She and neighbour Nicky Kane have been living close to each other for years, and Nicky was more than happy to be involved. “You want to do as much justice as you can to it,” Nicky says. “There was lots of love and care involved.” Bette was diagnosed with breast cancer in 2012 after discovering a lump in her breast. She underwent left side lumpectomy and lymph node surgery, which was followed by chemotherapy and radiation treatment. Bette says she did not feel fearful at the time. “I thought, ‘This is just something, lets deal with it’,” Bette says. “If you have a positive attitude,

Ngaio academic Tim Naish has won a prestigious international award for research into Antarctica, the first New Zealander to do so. Professor Naish, principal scientist at GNS Science and the Director of Victoria University of Wellington’s Antarctic Research Centre, won the Martha T. Muse Prize for Science and Policy in Antarctica, collecting $10,000. This leading global award for Antarctic science is funded by the Tinker Foundation and administered by the Scientific Committee on Antarctic Research (SCAR). Professor Naish won the award for research into understanding Antarctica’s response to past and present climate change and the role of Antarctica’s ice sheets

in global sea-level change through time. He says he is thrilled and honoured to receive the award, which reflects the combined efforts of a much larger group. “It’s an honour – and also recognition from peers and international colleagues. “That includes my friends and colleagues at the Antarctic Research Centre at Victoria University and at GNS Science,” Professor Naish says. Victoria University’s Pro Vice-Chancellor and Dean of Science Professor Mike Wilson, says the award is an outstanding achievement. “The award is recognition of New Zealand’s worldclass Antarctic research programme, and, specifically, Victoria University’s Antarctic Research Centre which has gained an

international reputation in understanding Antarctica’s past climate to better predict further changes,” he says. Antarctica New Zealand Chief Executive Peter Beggs, says the recognition of Professor Naish as a global research leader was a major boost for New Zealand’s Antarctic endeavours. “New Zealand is acknowledged as a leading collaborator in Antarctic science and policy and it is a significant achievement for an individual scientist to be recognised by his scientific peers with such a prestigious award,” he says. Professor Naish will be presented his award in Auckland on August 25-28 at the SCAR Open Science Conference, which will be attended by close to 1000 of the world’s leading Antarctic science and policy experts.

you heal faster.” Bette says the women are very proud of their cast torsos, and a strong relationship has formed between each woman and artist. Every torso tells a different story, Bette says. “Every artwork shows a meaningful journey. “We wanted to show the reality of surviving cancer, but also the beauty.” The public can view the works at exhibitions following the NZ Art Show, and they will be sold to the highest bidders at a live auction event at the New Zealand Academy of Fine Arts Gallery on August 21.