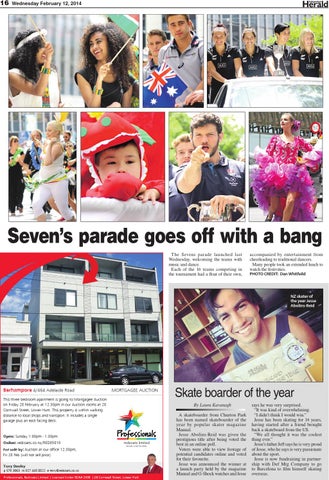 Seven’s parade goes off with a bang The Sevens parade launched last Wednesday, welcoming the teams with music and dance. Each of the 16 teams competing in the tournament had a float of their own,

accompanied by entertainment from cheerleading to traditional dancers. Many people took an extended lunch to watch the festivities. PHOTO CREDIT: Dan Whitfeild

This three bedroom apartment is going to Mortgagee Auction on Friday 28 February at 12:30pm in our Auction rooms at 28 Cornwall Street, Lower Hutt. This property is within walking distance to local shops and transport. It includes a single garage plus an east facing deck.

Skate boarder of the year By Laura Kavanagh A skateboarder from Churton Park has been named skateboarder of the year by popular skater magazine Manual. Jesse Abolins-Reid was given the prestigious title after being voted the best in an online poll. Voters were able to view footage of potential candidates online and voted for their favourite. Jesse was announced the winner at a launch party held by the magazine Manual and G-Shock watches and Jesse

says he was very surprised. “It was kind of overwhelming. “I didn’t think I would win.” Jesse has been skating for 14 years, having started after a friend brought back a skateboard from the US. “We all thought it was the coolest thing ever.” Jesse’s father Jeff says he is very proud of Jesse, who he says is very passionate about the sport. Jesse is now fundraising in partnership with Def Mtg Company to go to Barcelona to film himself skating overseas.