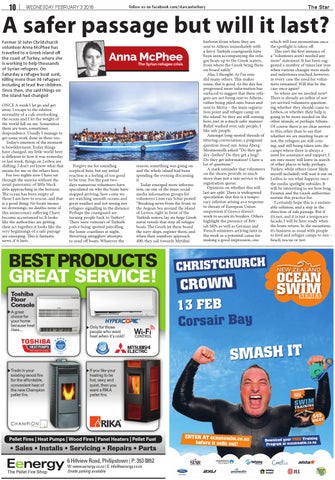 A safer passage but will it last? Former St John Christchurch volunteer Anna McPhee has travelled to a Greek island off the coast of Turkey, where she is working to help thousands of Syrian refugees. On Saturday a refugee boat sunk, killing more than 30 refugees including at least five children. Since then, she said things on the island had changed ONCE A week I let go and get away. I escape to the relative normality of a cafe overlooking the ocean and I let the weight of the world fall on me. Sometimes there are tears, sometimes despondence. Usually I manage to get some work done in there too. Today’s emotion of the moment is bewilderment. Today things have changed, my little world here is different to how it was yesterday or last week, things on Lesbos are shifting. I don’t yet know what that means for me or the others here. For two nights now I have sat through the sunrise without the usual panoramic of little black dots approaching in the horizon. The ocean has been empty of those I am here to rescue, and that is a good thing. No boats means no drownings, no deaths, none of this unnecessary suffering I have become accustomed to. It looks like the authorities are getting their act together, it looks like the very beginnings of a safe passage are emerging. This is fantastic news, if it lasts.

Forgive me for sounding sceptical here, but my initial reaction is a feeling of too good to be true. For the past two days numerous volunteers have speculated on why the boats have stopped arriving, how come we are watching smooth oceans and great weather and not seeing any refugees signalling in the distance. Perhaps the coastguard are turning people back to Turkey? There were rumours of Turkish police being spotted patrolling the Izmir coastlines at night, thwarting smugglers’ attempts to send off boats. Whatever the

reason, something was going on and the whole island had been spending the evening discussing it. Today emerged more information, on one of the main social media information groups for volunteers Léon van Schie posted: “Breaking news from the front; in the Aegean Sea around the island of Lesvos, right in front of the Turkish waters, lay six huge Greek naval vessels that stop all refugee boats. The Greek let them board the navy ships, register them, and when their numbers approach 400, they sail towards Mytilini

Toshiba Floor Console A great choice for your home because heat rises...

Trade in your existing wood fire for the affordable, convenient heat of the new Champion pellet fire.

Only for those people who want heat when it’s cold!

If you like your heating to be hot, sexy and quiet, then you want a RIKA pellet fire.

harbour, from where they are sent to Athens immediately with a ferry. Turkish coastguards have been seen accompanying the refugee boats up to the Greek waters, from where the Greek bring them on board safely.” Aha, I thought. As I’m sure did many others. This makes sense, this is good. As the day has progressed more information has surfaced to suggest that these refugees are not being sent to Athens, rather being piled onto buses and sent to Moria – the main registration point and refugee camp on the island. So they are still coming here, just in a much safer manner. Relief washed over, safe people, I like safe people. Amongst long-nested threads of tittering conversation, a poignant question stood out. Anna Åberg Moutzourelli asked: “Do they get dry clothes? Do they get a hug? Do they get information? I have a lot of questions.” A stark reminder that volunteers on the shores provide so much more than just a taxi service to the registration queue. Opinions on whether this will last are split. There is widespread speculation that this is a temporary solution arising as a response to threats of European Union suspension if Greece doesn’t work to secure its borders. Others highlight the presence of British MPs as well as German and French ministers arriving later in the week as a potential cause for making a good impression, one

which will lose momentum once the spotlight is taken off. This isn’t the first instance of a “volunteers aren’t needed any more” statement. It has been suggested a number of times last year when various changes were made and milestones reached, however, in every case the need for volunteers remained. Will this be the case once again? So where are we needed now? There is already an influx of notyet-arrived volunteers questioning whether they should come to Lesbos, or whether their help is going to be more needed on the other islands, or perhaps Athens. Of course there is no clear answer to this, other than to say that whether we are meeting boats or not, the refugees are still coming, and still being taken into the camps where there is always a need for assistance and support. I am sure many will leave in search of other places to help, perhaps Turkey, while others (most likely myself included) will wait it out on Lesbos to see what happens once the media spotlight subsides. It will be interesting to see how long Frontex and the Greek authorities sustain this practice for. I certainly hope this is a sustainable solution, and a step in the direction of safe passage. But if it’s not, and it is just a temporary facade, I will be here ready when the boats return. In the meantime, it’s business as usual with people to feed and refugee camps to run – beach rescue or not.