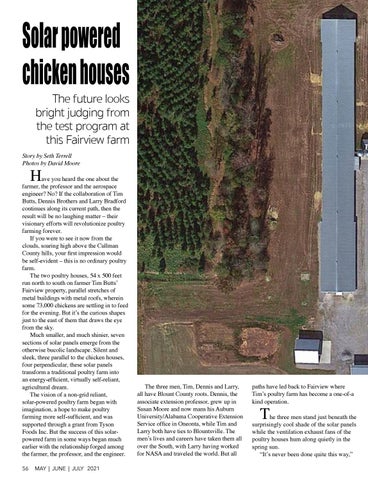 ave you heard the one about the farmer, the professor and the aerospace engineer? No? If the collaboration of Tim Butts, Dennis Brothers and Larry Bradford continues along its current path, then the result will be no laughing matter – their visionary efforts will revolutionize poultry farming forever. If you were to see it now from the clouds, soaring high above the Cullman County hills, your first impression would be self-evident – this is no ordinary poultry farm. The two poultry houses, 54 x 500 feet run north to south on farmer Tim Butts’ Fairview property, parallel stretches of metal buildings with metal roofs, wherein some 73,000 chickens are settling in to feed for the evening. But it’s the curious shapes just to the east of them that draws the eye from the sky. Much smaller, and much shinier, seven sections of solar panels emerge from the otherwise bucolic landscape. Silent and sleek, three parallel to the chicken houses, four perpendicular, these solar panels transform a traditional poultry farm into an energy-efficient, virtually self-reliant, agricultural dream. The vision of a non-grid reliant, solar-powered poultry farm began with imagination, a hope to make poultry farming more self-sufficient, and was supported through a grant from Tyson Foods Inc. But the success of this solarpowered farm in some ways began much earlier with the relationship forged among the farmer, the professor, and the engineer. 56

The three men, Tim, Dennis and Larry, all have Blount County roots. Dennis, the associate extension professor, grew up in Susan Moore and now mans his Auburn University/Alabama Cooperative Extension Service office in Oneonta, while Tim and Larry both have ties to Blountsville. The men’s lives and careers have taken them all over the South, with Larry having worked for NASA and traveled the world. But all

paths have led back to Fairview where Tim’s poultry farm has become a one-of-a kind operation.

he three men stand just beneath the surprisingly cool shade of the solar panels while the ventilation exhaust fans of the poultry houses hum along quietly in the spring sun. “It’s never been done quite this way,” More from The Good Life Magazine