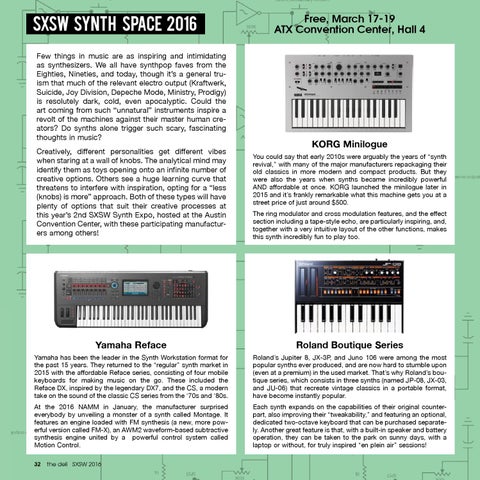 sxsw synth space 2016 Few things in music are as inspiring and intimidating as synthesizers. We all have synthpop faves from the Eighties, Nineties, and today, though it’s a general truism that much of the relevant electro output (Kraftwerk, Suicide, Joy Division, Depeche Mode, Ministry, Prodigy) is resolutely dark, cold, even apocalyptic. Could the art coming from such “unnatural” instruments inspire a revolt of the machines against their master human creators? Do synths alone trigger such scary, fascinating thoughts in music? Creatively, different personalities get different vibes when staring at a wall of knobs. The analytical mind may identify them as toys opening onto an infinite number of creative options. Others see a huge learning curve that threatens to interfere with inspiration, opting for a “less (knobs) is more” approach. Both of these types will have plenty of options that suit their creative processes at this year’s 2nd SXSW Synth Expo, hosted at the Austin Convention Center, with these participating manufacturers among others!

You could say that early 2010s were arguably the years of “synth revival,” with many of the major manufacturers repackaging their old classics in more modern and compact products. But they were also the years when synths became incredibly powerful AND affordable at once. KORG launched the minilogue later in 2015 and it’s frankly remarkable what this machine gets you at a street price of just around $500. The ring modulator and cross modulation features, and the effect section including a tape-style echo, are particularly inspiring, and, together with a very intuitive layout of the other functions, makes this synth incredibly fun to play too.

Yamaha has been the leader in the Synth Workstation format for the past 15 years. They returned to the “regular” synth market in 2015 with the affordable Reface series, consisting of four mobile keyboards for making music on the go. These included the Reface DX, inspired by the legendary DX7, and the CS, a modern take on the sound of the classic CS series from the ‘70s and ‘80s.

Roland’s Jupiter 8, JX-3P, and Juno 106 were among the most popular synths ever produced, and are now hard to stumble upon (even at a premium) in the used market. That’s why Roland’s boutique series, which consists in three synths (named JP-08, JX-03, and JU-06) that recreate vintage classics in a portable format, have become instantly popular.

At the 2016 NAMM in January, the manufacturer surprised everybody by unveiling a monster of a synth called Montage. It features an engine loaded with FM synthesis (a new, more powerful version called FM-X), an AWM2 waveform-based subtractive synthesis engine united by a powerful control system called Motion Control.

Each synth expands on the capabilities of their original counterpart, also improving their “tweakability,” and featuring an optional, dedicated two-octave keyboard that can be purchased separately. Another great feature is that, with a built-in speaker and battery operation, they can be taken to the park on sunny days, with a laptop or without, for truly inspired “en plein air” sessions!