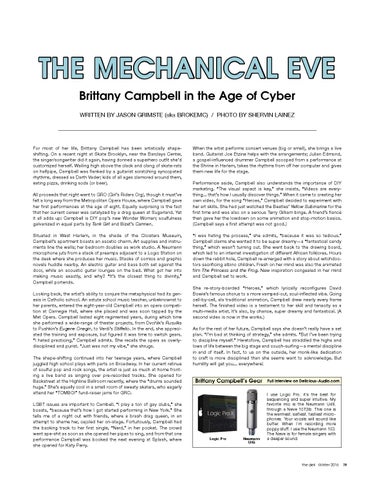 For most of her life, Brittany Campbell has been artistically shapeshifting. On a recent night at Skate Brooklyn, near the Barclays Center, the singer/songwriter did it again, having donned a superhero outfit she’d customized herself. Wailing high above the clack and clang of skate-rats on halfpipe, Campbell was flanked by a guitarist scratching syncopated rhythms, dressed as Darth Vader; kids of all ages clamored around them, eating pizza, drinking soda (or beer). All proceeds that night went to GRO (Girl’s Riders Org), though it must’ve felt a long way from the Metropolitan Opera House, where Campbell gave her first performances at the age of eight. Equally surprising is the fact that her current career was catalyzed by a drag queen at Sugarland. Yet it all adds up: Campbell is DIY pop’s new Wonder Woman; soulfulness galvanized in equal parts by Tank Girl and Bizet’s Carmen. Situated in West Harlem, in the shade of the Cloisters Museum, Campbell’s apartment boasts an ascetic charm. Art supplies and instruments line the walls; her bedroom doubles as work studio. A Neumann microphone juts from a stack of preamps adjacent to a Logic Station on the desk where she produces her music. Stacks of comics and graphic novels huddle nearby. An electric guitar and bass both set against the door, while an acoustic guitar lounges on the bed. What got her into making music exactly, and why? “It’s the closest thing to divinity,” Campbell portends. Looking back, the artist’s ability to conjure the metaphysical had its genesis in Catholic school. An astute school music teacher, unbeknownst to her parents, entered the eight-year-old Campbell into an opera competition at Carnegie Hall, where she placed and was soon tapped by the Met Opera. Campbell lasted eight regimented years, during which time she performed a wide-range of theater projects, from Dvořák’s Rusulka to Pushkin’s Eugene Onegin, to Verdi’s Stiffelio. In the end, she appreciated the training and exposure, but figured it was time to switch gears. “I hated practicing,” Campbell admits. She recalls the opera as overlydisciplined and purist. “Just was not my vibe,” she shrugs. The shape-shifting continued into her teenage years, where Campbell juggled high school plays with parts on Broadway. In her current retinue of soulful pop and rock songs, the artist is just as much at home fronting a live band as singing over pre-recorded tracks. She opened for Backstreet at the Highline Ballroom recently, where the “drums sounded huge.” She’s equally cool in a small room of sweaty skaters, who eagerly attend her “TOMBOI” fund-raiser jams for GRO. LGBT issues are important to Cambell. “I play a ton of gay clubs,” she boasts, “because that’s how I got started performing in New York.” She tells me of a night out with friends, where a brash drag queen, in an attempt to shame her, cajoled her on-stage. Fortuitously, Campbell had the backing track to her first single, “Nerd,” in her pocket. The crowd went ape-shit as soon as she opened her pipes to sing, and from that one performance Campbell was booked the next evening at Splash, where she opened for Katy Perry.

When the artist performs concert venues (big or small), she brings a live band. Guitarist Joe Etzine helps with the arrangements; Julian Edmond, a gospel-influenced drummer Campbell scooped from a performance at the Shrine in Harlem, takes the rhythms from off her computer and gives them new life for the stage. Performance aside, Campbell also understands the importance of DIY marketing. “The visual aspect is key,” she insists, “Videos are everything... that’s how I usually discover things.” When it came to creating her own video, for the song “Heroes,” Campbell decided to experiment with her art skills. She had just watched the Beatles’ Yellow Submarine for the first time and was also on a serious Terry Gilliam binge. A friend’s fiancé then gave her the lowdown on some animation and stop-motion basics. (Campbell says a first attempt was not good.) “I was hating the process,” she admits, “because it was so tedious.” Campbell claims she wanted it to be super dreamy—a “fantastical candy thing,” which wasn’t turning out. She went back to the drawing board, which led to an internet investigation of different African folklores. Hours down the rabbit hole, Campbell re-emerged with a story about witchdoctors sacrificing albino children. Fresh on her mind was also the animated film The Princess and the Frog. New inspiration congealed in her mind and Campbell set to work. She re-story-boarded “Heroes,” which lyrically reconfigures David Bowie’s famous chorus to a more vamped-out, soul-inflected vibe. Going cell-by-cell, ala traditional animation, Campbell drew nearly every frame herself. The finished video is a testament to her skill and tenacity as a multi-media artist. It’s also, by chance, super dreamy and fantastical. (A second video is now in the works.) As for the rest of her future, Campbell says she doesn’t really have a set plan. “I’m bad at thinking of strategy,” she admits. “But I’ve been trying to discipline myself.” Heretofore, Campbell has straddled the highs and lows of life between the big stage and couch-surfing—a mental discipline in and of itself. In fact, to us on the outside, her monk-like dedication to craft is more disciplined than she seems want to acknowledge. But humility will get you... everywhere!

I use Logic Pro; it’s the best for sequencing and super intuitive. My favorite mic is the Neumann U48, through a Neve 1073lb. This one is the warmest, saltiest, tastiest microphones. Your vocals will sound like butter. When I’m recording more poppy stuff, I use the Neumann 103. The Neve is for female singers with a deeper sound.

Winter 2016. Featuring sci-fi soul singer Brittany Campbell on the cover. Plus: full coverage of "The Deli"'s Brooklyn MixCon event and a penetrating look at the fabled Manhattan DIY art hub: ABC No Rio.