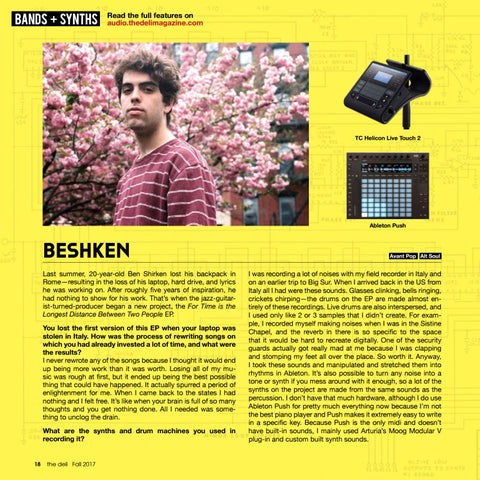 Read the full features on audio.thedelimagazine.com

Beshken Last summer, 20-year-old Ben Shirken lost his backpack in Rome—resulting in the loss of his laptop, hard drive, and lyrics he was working on. After roughly five years of inspiration, he had nothing to show for his work. That’s when the jazz-guitarist-turned-producer began a new project, the For Time is the Longest Distance Between Two People EP. You lost the first version of this EP when your laptop was stolen in Italy. How was the process of rewriting songs on which you had already invested a lot of time, and what were the results? I never rewrote any of the songs because I thought it would end up being more work than it was worth. Losing all of my music was rough at first, but it ended up being the best possible thing that could have happened. It actually spurred a period of enlightenment for me. When I came back to the states I had nothing and I felt free. It’s like when your brain is full of so many thoughts and you get nothing done. All I needed was something to unclog the drain. What are the synths and drum machines you used in recording it? 18

I was recording a lot of noises with my field recorder in Italy and on an earlier trip to Big Sur. When I arrived back in the US from Italy all I had were these sounds. Glasses clinking, bells ringing, crickets chirping—the drums on the EP are made almost entirely of these recordings. Live drums are also interspersed, and I used only like 2 or 3 samples that I didn’t create. For example, I recorded myself making noises when I was in the Sistine Chapel, and the reverb in there is so specific to the space that it would be hard to recreate digitally. One of the security guards actually got really mad at me because I was clapping and stomping my feet all over the place. So worth it. Anyway, I took these sounds and manipulated and stretched them into rhythms in Ableton. It’s also possible to turn any noise into a tone or synth if you mess around with it enough, so a lot of the synths on the project are made from the same sounds as the percussion. I don’t have that much hardware, although I do use Ableton Push for pretty much everything now because I’m not the best piano player and Push makes it extremely easy to write in a specific key. Because Push is the only midi and doesn’t have built-in sounds, I mainly used Arturia’s Moog Modular V plug-in and custom built synth sounds.

The yearly issue of The Deli focused on the Electronic Scene in NYC and linked to the Brooklyn Synth Expo.