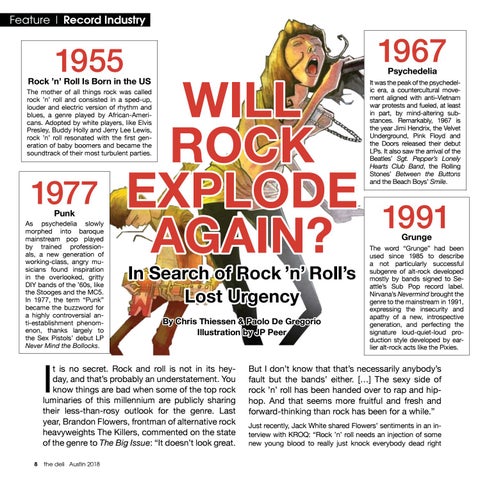 rock ’n’ roll is born in the us

The mother of all things rock was called rock ’n’ roll and consisted in a sped-up, louder and electric version of rhythm and blues, a genre played by African-Americans. Adopted by white players, like Elvis Presley, Buddy holly and Jerry Lee Lewis, rock ’n’ roll resonated with the first generation of baby boomers and became the soundtrack of their most turbulent parties.

As psychedelia slowly morphed into baroque mainstream pop played by trained professionals, a new generation of working-class, angry musicians found inspiration in the overlooked, gritty DIY bands of the ’60s, like the Stooges and the MC5. In 1977, the term “Punk” became the buzzword for a highly controversial anti-establishment phenomenon, thanks largely to the Sex Pistols’ debut LP Never Mind the Bollocks.

t is no secret. Rock and roll is not in its heyday, and that’s probably an understatement. You know things are bad when some of the top rock luminaries of this millennium are publicly sharing their less-than-rosy outlook for the genre. Last year, Brandon Flowers, frontman of alternative rock heavyweights The Killers, commented on the state of the genre to The Big Issue: “It doesn’t look great. 8

It was the peak of the psychedelic era, a countercultural movement aligned with anti–vietnam war protests and fueled, at least in part, by mind-altering substances. Remarkably, 1967 is the year Jimi hendrix, the velvet Underground, Pink Floyd and the Doors released their debut LPs. It also saw the arrival of the Beatles’ Sgt. Pepper’s Lonely Hearts Club Band, the Rolling Stones’ Between the Buttons and the Beach Boys’ Smile.

The word “Grunge” had been used since 1985 to describe a not particularly successful subgenre of alt-rock developed mostly by bands signed to Seattle’s Sub Pop record label. Nirvana’s Nevermind brought the genre to the mainstream in 1991, expressing the insecurity and apathy of a new, introspective generation, and perfecting the signature loud-quiet-loud production style developed by earlier alt-rock acts like the Pixies.

But I don’t know that that’s necessarily anybody’s fault but the bands’ either. […] The sexy side of rock ’n’ roll has been handed over to rap and hiphop. And that seems more fruitful and fresh and forward-thinking than rock has been for a while.” Just recently, Jack White shared Flowers’ sentiments in an interview with KRoQ: “Rock ’n’ roll needs an injection of some new young blood to really just knock everybody dead right