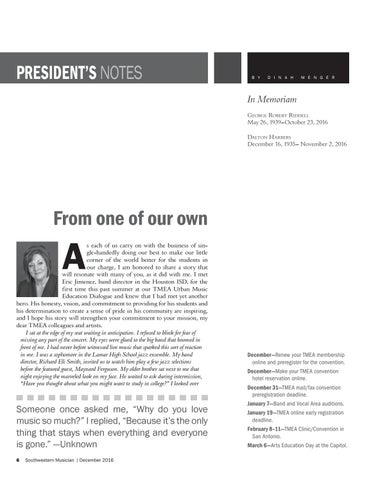 From one of our own

s each of us carry on with the business of single-handedly doing our best to make our little corner of the world better for the students in our charge, I am honored to share a story that will resonate with many of you, as it did with me. I met Eric Jimenez, band director in the Houston ISD, for the first time this past summer at our TMEA Urban Music Education Dialogue and knew that I had met yet another hero. His honesty, vision, and commitment to providing for his students and his determination to create a sense of pride in his community are inspiring, and I hope his story will strengthen your commitment to your mission, my dear TMEA colleagues and artists. I sat at the edge of my seat waiting in anticipation. I refused to blink for fear of missing any part of the concert. My eyes were glued to the big band that boomed in front of me. I had never before witnessed live music that sparked this sort of reaction in me. I was a sophomore in the Lamar High School jazz ensemble. My band director, Richard Eli Smith, invited us to watch him play a few jazz selections before the featured guest, Maynard Ferguson. My older brother sat next to me that night enjoying the marveled look on my face. He waited to ask during intermission, “Have you thought about what you might want to study in college?” I looked over

Someone once asked me, “Why do you love music so much?” I replied, “Because it’s the only thing that stays when everything and everyone is gone.” —Unknown 6 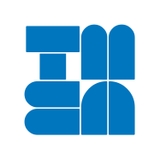