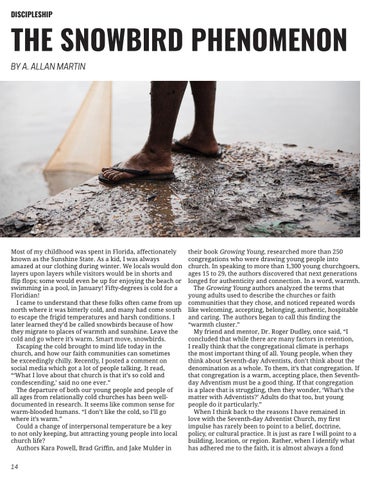 THE SNOWBIRD PHENOMENON BY A. ALLAN MARTIN

Most of my childhood was spent in Florida, affectionately known as the Sunshine State. As a kid, I was always amazed at our clothing during winter. We locals would don layers upon layers while visitors would be in shorts and flip flops; some would even be up for enjoying the beach or swimming in a pool, in January! Fifty-degrees is cold for a Floridian! I came to understand that these folks often came from up north where it was bitterly cold, and many had come south to escape the frigid temperatures and harsh conditions. I later learned they’d be called snowbirds because of how they migrate to places of warmth and sunshine. Leave the cold and go where it’s warm. Smart move, snowbirds. Escaping the cold brought to mind life today in the church, and how our faith communities can sometimes be exceedingly chilly. Recently, I posted a comment on social media which got a lot of people talking. It read, “‘What I love about that church is that it’s so cold and condescending,’ said no one ever.” The departure of both our young people and people of all ages from relationally cold churches has been welldocumented in research. It seems like common sense for warm-blooded humans. “I don’t like the cold, so I’ll go where it’s warm.” Could a change of interpersonal temperature be a key to not only keeping, but attracting young people into local church life? Authors Kara Powell, Brad Griffin, and Jake Mulder in 14

their book Growing Young, researched more than 250 congregations who were drawing young people into church. In speaking to more than 1,300 young churchgoers, ages 15 to 29, the authors discovered that next generations longed for authenticity and connection. In a word, warmth. The Growing Young authors analyzed the terms that young adults used to describe the churches or faith communities that they chose, and noticed repeated words like welcoming, accepting, belonging, authentic, hospitable and caring. The authors began to call this finding the “warmth cluster.” My friend and mentor, Dr. Roger Dudley, once said, “I concluded that while there are many factors in retention, I really think that the congregational climate is perhaps the most important thing of all. Young people, when they think about Seventh-day Adventists, don’t think about the denomination as a whole. To them, it’s that congregation. If that congregation is a warm, accepting place, then Seventhday Adventism must be a good thing. If that congregation is a place that is struggling, then they wonder, ‘What’s the matter with Adventists?’ Adults do that too, but young people do it particularly.” When I think back to the reasons I have remained in love with the Seventh-day Adventist Church, my first impulse has rarely been to point to a belief, doctrine, policy, or cultural practice. It is just as rare I will point to a building, location, or region. Rather, when I identify what has adhered me to the faith, it is almost always a fond 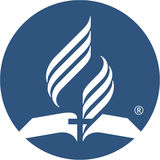