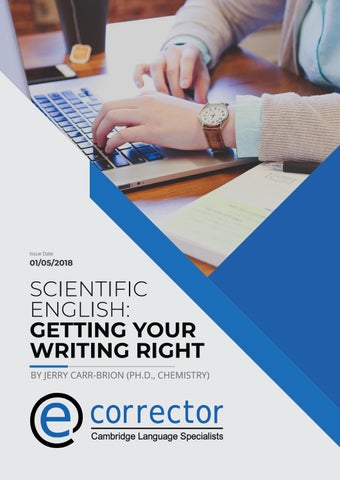 1. INTRODUCTION WRITING SCIENTIFIC ENGLISH WHEN IT ISNâ&#x20AC;&#x2122;T YOUR FIRST LANGUAGE CAN BE A CHALLENGE Having a native proofreader check your work is essen-

The fewer the mistakes at this point, the easier the

tial if you want to get your message across clearly and

copy-editing and proofreading tasks become and the

submit a professional-looking paper or report. How-

less likely it is that alterations to the intended meaning

ever, as a proofreader myself, I realise that there are

will be accidently introduced. This article gives useful

advice on planning your writing, guidance on style and

py-editing and proofreading to make the draft clearer.

common errors to be avoided.

2. THINGS TO DO BEFORE YOU START WRITING 1. Check you’ve done all the experiments you need to. Before you do anything else, check that there aren’t any gaps in your work. It’s easy to miss out control experiments or full characterization of chemical or biochemical substances. It’s best to do these now rather than have a reviewer point them out later.

2. Decide what needs to be in the paper and what doesn’t. It may be necessary to leave out some results that aren’t really relevant.

3. Carefully read the ‘instructions to authors’ in the journal you aim to publish in. It’s worth

5. Decide whether you want UK English or US

looking at a number of papers in a similar field

English, setting this as your language prefer-

to yours in the journal to see how the rules are

ence for the whole document. As a proofread-

er, I often get documents where the language

given, particularly with regard to the length of

setting changes from UK English to US English

in the middle of the document. So ‘…the successful modelling of a novel, coloured carotenoid-protein complex’ (UK) in the abstract

4. Decide on the sections you want in your doc-

becomes ‘…the successful modeling of a novel,

ument. Typically these will be the following:

colored carotenoid-protein complex’ (US) in the

conclusions. Decide on one form of English and

stick with it throughout. Incidentally, Australian

appendices/diagrams. However, the exact for-

and New Zealand English is virtually the same

mat will depend on the type of document and

as UK English, if you happen to be writing for

journal where it will be published.

3. ADVICE ON STYLE Keep your writing simple and straightforward. Long sentences with several clauses often lead to confusion. They may be perfectly clear in your native language, but ambiguous when put into English.

‘The protein/ligand complex isolated by the microcentrifugation procedure and subjected to the stability protocol was bound using the coupling catalyst to the second ligand isolated by HPLC, giving a substance of lesser stability than was found in its previous state prior to the process.’

‘Process’ might refer to ‘microcentrifugation’, ‘the stability protocol’, ‘the binding’ or the ‘HPLC’. Was the ‘HPLC’ on the ‘protein/ligand complex’ or on just the ‘second ligand’? After ten similar, ambiguous sentences, the proofreader is ready to quit in disgust.

Split up such sentences into two or three shorter ones, making sure that it’s clear what words such as ‘substance’ or ‘process’ refer to. If you have more than one complex, you can always refer to them as ‘complex 1’, complex 2’ etc. You can always use ‘i.e.’ if the meaning is still unclear. A clearer version of the above long sentence might read:

On the other hand, only ever using short, single-phrase sentences can seem somewhat childish. You don’t just have to use ‘and’ to link them. ‘But’, ‘yet’ and ‘while’ are useful conjunctions when comparing two things. For example, the following piece has too many short sentences:

‘The protecting groups underwent hydrolysis in the presence of dilute hydrochloric acid. Attempts to hydrolyse under basic conditions with sodium hydroxide were unsuccessful. Under these conditions decomposition occurred.’

This could be rewritten as:

‘The protecting groups underwent hydrolysis in the presence of dilute hydrochloric acid, while attempts to hydrolyse under basic conditions were unsuccessful because decomposition occurred.’

The bulk of a paper, including the experimental method and results, is normally written in the past tense. Avoid changing between the past and present tenses in the middle of a description:

‘The resulting mixture was centrifuged at 15,000 g in order to remove unwanted solids. This gives a largely clear peptide solution. The peptide was further purified by preparative reversed-phase HPLC.’

In the above example, ‘gives’ should be replaced with ‘gave’.

In an introduction, you can write in the present tense about established ‘facts’ or uncontentious theories, e.g. ‘Proteins are often purified by ion-exchange chromatography.’ However, where there is controversy between scientists in a particular field, it’s best to use the past tense, e.g. ‘Whereas Bloggs et al. (5) claimed that the antibiotic adopted a dimeric structure in basic solutions, Mustermann et al. (6) claimed that the trimer was the main form present.’ In this case, there is no consensus, so neither claim should be reported as an established fact, although both should be referenced if there is reasonable doubt about who is correct.

Putting in ‘the’ when not needed. In English, most nouns referring to physical objects have either ‘a’ or ‘the’ in front of them (alternatively, appropriate words such as ‘some’, ‘any’, ‘each’, ‘no’, ‘both’, ‘either’, ‘neither’, ‘this’, ‘that’, ‘these’, ‘those’, ‘every’, ’few’, ‘all’ or a particular number can be used instead). However, there are some cases, typically when discussing a class of objects in general, where no article or equivalent is needed. So ‘The chromatographic methods are essential for modern biochemistry’ should be ‘Chromatographic methods are essential for modern biochemistry.’ On the other hand, ‘The chromatographic methods used by us were IEC and GPC’ is correct, since it refers to specific methods, not methods in general.

Putting adjectives after a noun, not

Misplaced apostrophes, such as ‘Alzheimers’ disease’ (should be ‘Alz-

‘Both precipitates were…’). Note that in statistics it should be ‘Stu-

when it should be ‘The above-men-

dent’s t-test’ with a capital letter and an apostrophe, since ‘Student’

The misuse of ‘made’ where ‘carried out’ or ‘run’ is needed: ‘The experiment

increase of weight of 2 g’ should be ‘An

increase in weight of 2 g’. Similarly, ‘A

ment was run under both acidic and basic conditions.’ In English we make a

rise of temperature of 2˚C’ should be

cake or make a noise, but carry out or run experiments.

Using ‘in’ for columns, evaporators, etc.: ‘The glycosides were separated in an HPLC column.’ Here ‘in’ should be replaced by ‘on’, ‘with’ or ‘by’ (any of these is fine for columns). Similarly, we remove solvent ‘on a rotary evaporator’ or ‘with a rotary evaporator’. However, we do dry solids ‘in an oven’, stir substances ‘in a flask’ and work ‘in a glovebox’ when necessary.

VERB BEFORE THE SUBJECT

Use of a verb before the subject: ‘For determining viral structure is useful electron microscopy’ should be ‘Electron microscopy is useful for determining viral structure.’ In English, verbs come before their subjects in some questions (‘Was it possible?’) or in some conditional phrases (‘Only when the crystals fail to form should the anti-solvent be added’). In general, keep to the usual ‘subject-verb-object’ word order.

Not using the perfect tense when it’s

Using the perfect tense where the

Use of double negatives. In English,

needed: ‘Despite impure extracts be-

simple past is needed: ‘The addition

two negatives words, such as ‘not’ or

ing used for many years, the pure tri-

of acetic acid gave a precipitate, which

’no’, make a positive statement. So

saccharide was not yet isolated’ should

has been removed by filtration’ should

‘We didn’t obtain no crystals on add-

be ‘Despite impure extracts being used

be ‘The addition of acetic acid gave a

for many years, the pure trisaccharide

precipitate, which was removed by fil-

some crystals were obtained. The

has not yet been isolated.’ The perfect

tration.’ Experiments are normally re-

sentence should be ‘We didn’t ob-

tense often refers to past actions or

ported using the simple past (i.e. use

tain any crystals on adding ammo-

situations where the time is not spec-

nia solution.’ Pink Floyd may have

ified and continues into the present,

sung ‘We don’t need no education’,

e.g. ‘Protein crystallization has been a

but such phrases are best avoided

challenge for many years.’

5. CONCLUSIONS Writing technical English is a complex process, and an article such as this cannot possibly cover all the issues that can arise. Fortunately, there are many useful web resources dealing with English grammar and spelling, along with a large number of books published in many languages. However, so long as your meaning is unambiguous, a good proofreader will correct any mistakes, so you donâ&#x20AC;&#x2122;t have to write perfectly. The more you practice writing in English, the more enjoyable the process will become. 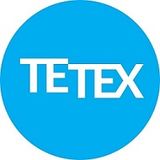 SCIENTIFIC ENGLISH - GETTING YOUR WRITING RIGHT

This guide gives useful advice on planning your writing, guidance on style and common errors to be avoided.

SCIENTIFIC ENGLISH - GETTING YOUR WRITING RIGHT

This guide gives useful advice on planning your writing, guidance on style and common errors to be avoided.