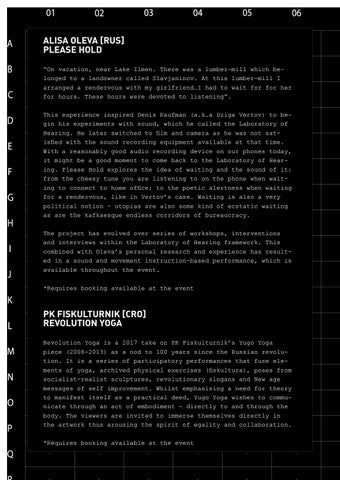 ALISA OLEVA [RUS] PLEASE HOLD “On vacation, near Lake Ilmen. There was a lumber-mill which belonged to a landowner called Slavjaninov. At this lumber-mill I arranged a rendezvous with my girlfriend…I had to wait for for her for hours. These hours were devoted to listening”. This experience inspired Denis Kaufman (a.k.a Dziga Vertov) to begin his experiments with sound, which he called the Laboratory of Hearing. He later switched to film and camera as he was not satisfied with the sound recording equipment available at that time. With a reasonably good audio recording device on our phones today, it might be a good moment to come back to the Laboratory of Hearing. Please Hold explores the idea of waiting and the sound of it: from the cheesy tune you are listening to on the phone when waiting to connect to home office; to the poetic alertness when waiting for a rendezvous, like in Vertov’s case. Waiting is also a very political notion - utopias are also some kind of ecstatic waiting as are the kafkaesque endless corridors of bureaucracy. The project has evolved over series of workshops, interventions and interviews within the Laboratory of Hearing framework. This combined with Oleva’s personal research and experience has resulted in a sound and movement instruction-based performance, which is available throughout the event. *Requires booking available at the event

PK FISKULTURNIK [CRO] REVOLUTION YOGA Revolution Yoga is a 2017 take on PK Fiskulturnik’s Yugo Yoga piece (2008-2013) as a nod to 100 years since the Russian revolution. It is a series of participatory performances that fuse elements of yoga, archived physical exercises (fiskultura), poses from socialist-realist sculptures, revolutionary slogans and New age messages of self improvement. Whilst emphasising a need for theory to manifest itself as a practical deed, Yugo Yoga wishes to communicate through an act of embodiment – directly to and through the body. The viewers are invited to immerse themselves directly in the artwork thus arousing the spirit of egality and collaboration. *Requires booking available at the event

Assembly of Disturbance is a three-day festival that gives voice to the manifest dissonance, the emergent anger and resultant resistance in Britain in the year 2017. Curated by Test Dept, Aaron James and David Altweger, the festival explores how one hundred years on from the Russian Revolution, which unleashed radical artistic forces that sought to build an idealistic new society, the current socio-political climate is also engendering a need for a profound shift in governance. As such, Assembly of Disturbance invites you to join an assemblage of artists to consider the prevalent and pressing intersection of art and activism, challenging and disrupting the current state of affairs in Britain, and beyond. The festival will take place at Red Gallery and Kamio in Shoreditch between Thursday 5th and Saturday 7th October 2017. The two venues will act as a hub for a series of performances, film screenings, AV installation, sound installations, workshops, a symposium, DJs and Live Acts.