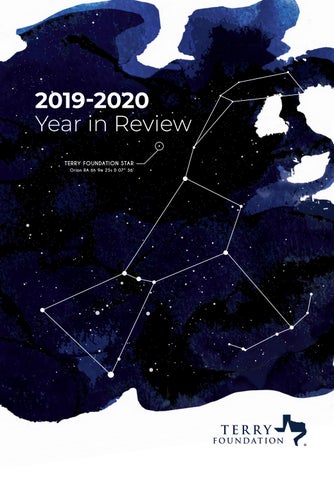 The University of Houston

The University of North Texas

The University of Texas at Arlington

The University of Texas at Austin

The University of Texas at Dallas

The University of Texas at El Paso

The University of Texas at San Antonio

One of the early slogans selected for the Terry Foundation is the phrase “Many Stars Come From Texas,” and we believe in that now more than ever. We proudly welcomed 268 new Terry “stars” in 2019. They join a long list of hard-working, service-oriented student leaders who have been carrying forward the Terry legacy since 1987. 2020 will certainly be a year to remember. For many, this year has been marked with change, uncertainty, and disappointment. However, the Terry Community still has much to celebrate, and we are proud to look back on the past year and reflect on the character and resilience of our Scholars.

The Terry Foundation’s mission is to develop future leaders of Texas through access to education.

This past year we saw many examples of the Terry Community stepping up to help each other. In the fall, our current Scholars invited Terry Alumni to serve as their keynote speakers for the fall banquets. These alumni provided insight, wisdom, and tangible advice for our current students. As we rolled into spring, the entire world ground to a standstill in the wake of the global COVID-19 pandemic. Through adversity, our Terry Scholars found a way to shine bright. We witnessed student organization officers pivot to virtual programming to support their Terry communities. We had 100 interview panelists rise to the occasion to help complete 454 virtual Terry interviews. We had alumni offer to help with virtual networking events and pledge their support to current Scholars through mentoring opportunities on Terry Connect. And finally, when we sadly cancelled our annual spring picnics, our university partners, Scholars, and alumni came together to help celebrate our graduating seniors in new and unique ways.

The stars shine brightest when the sky is the darkest.

About Our Cover This year’s design represents the strength of the Terry community, which is made up of many brilliant individuals.

The Terry Foundation’s vision is to create a community of educated leaders who utilize their talents to strengthen the state of Texas and impact the world.

Yes, 2020 will certainly be a year to remember. As we look back, we can see that the stars shine brightest when the sky is the darkest. Thank you, Terry Scholars, for shining bright as examples of what can happen when we celebrate and support each other. You make us all #terryproud!

Terry Scholars Take on 2020 A Year in Review

Every star on its own is impressive, but one must use a telescope to see its unique beauty and power. We may not always look closely enough at other people to see them as more than a speck of light. However, as Terry Scholars, our connections build a constellation that is impressive, even from first glance. Each scholar serves as a shining example of scholarship, leadership, service and community. Together, we are capable of impacting the world. The cover also showcases the Terry Foundation Star, which was dedicated to commemorate Mr. Terry and the impact of his mission.

Terry Scholar Orientations &amp; Banquets Welcome Orientations In August 2019, we welcomed 268 new Terry Scholars across our 13 universities. An event was held on each campus just prior to the start of the fall semester. For new Scholars, the orientation is designed to focus special emphasis on the transition faced by first-year and transferring college students. Each day’s events included presentations on the Foundation Scholarship Program by Foundation executive management and staff. At the conclusion of the orientation programs, the new Scholars enjoyed networking with each other and with Scholars from the other cohorts.

Fall Banquets During October 2019, Scholars at each of the thirteen universities were hosted by the Foundation at the annual fall banquets in elegant settings on each campus. The Foundation hosted a “Networking Best Practices” webinar to help new Scholars prepare for the banquets, and many of the student organizations also hosted etiquette dinners in preparation. Scholars enjoyed dinner and networking with their peers, Foundation Directors, Scholar Alumni, and representatives of the universities’ administration. Each dinner program included remarks from leaders of the Terry Student Organization and representatives from the graduating class. Every Terry Banquet also featured a keynote speech from a Terry Alumna/Alumnus selected from a list of volunteer speakers.

To be a star you must shine your own light, follow your own path, and donâ&amp;#x20AC;&amp;#x2122;t worry about darkness.

There is always something new to be seen in the unchanging night sky.

Terry Scholars of The University of Houston

Terry Scholars of The University of North Texas

Terry Scholars of The University of Texas at Arlington

Terry Scholars of The University of Texas at Austin

The brightest stars are those who shine for the benefit for others.

Terry Scholars of The University of Texas at Dallas

Terry Scholars of The University of Texas at El Paso

Keep your eyes on the stars and your feet on the ground.

Terry Scholars of The University of Texas at San Antonio

KIMBERLY GARZA (2017) with her self-published book

Shining Brightly for Others and for Each Other The world faced many challenges in the spring of 2020, and Terry Scholars stepped in to lead when they were needed. Scholars addressed public health and social equity issues in their communities. Student organization officers pivoted to virtual programming to support their Terry communities, and once the Foundationâ&amp;#x20AC;&amp;#x2122;s picnics were canceled, many officers hosted virtual ceremonies for their graduating seniors.

Let your light shine so brightly that others can see their way out of the dark.

100 Terry Interview Panelists quickly adapted to a virtual format and completed 454 virtual Terry interviews. Alumni offered to help with virtual networking events and pledged their support to current Scholars through mentoring opportunities on Terry Connect. Terry Alumni and student leaders participated in live streams to address topics like mental health, being a leader during challenging times, and adjusting to changes in personal and professional timelines. Terry musicians, poets, and artists used their talents to support the Terry Community during biweekly Terry Talent Show streams.

Terrys acted as beacons of support for their communities and for each other during the difficult times faced by our country in 2020.

Daysy Guevara (TWU 2019) supported Crossroads Community Services through volunteering and, eventually, through a temporary staff position. Her efforts packing and donating essential food items are supporting those impacted heavily by the pandemic. Earl Potts (UT 2018) created a Black business directory app during the pandemic to help other Black UT students find a sense of community in Austin. He individually coded about 200 Black businesses into his app, creating an extensive resource for his community.

A group of 2018 and 2019 TAMU scholars (Marianela Cintron, Blair McDaniel, Jerry Reiger, Kameron Smith, Hannah Taylor, Jasmine Tran, Omar Hernandez, and Tyler Hope) placed among the TOP TEN winning teams in the â&amp;#x20AC;&amp;#x153;Aggies Against COVID-19â&amp;#x20AC;? Virtual Competition. This was an engineering competition that challenged all A&amp;M students to identify and solve a problem to help combat the COVID-19 outbreak and ease personal suffering. Under the team name Coro-NO, these Terry Scholars and a ninth teammate devised a machine to disinfect masks such as the N-95. Utilizing UV-C lights, their design sanitizes these masks faster than any present method, extending the life of masks and allowing more to exist in circulation in medical facilities.

Terry Scholar Grads Ready to Take on the World

The Terry Foundation has brightened each of our futures and sent us out to make an impact on the world like the stars strewn across the night sky. Daniel Shay (TXST 2009)

Terry Scholar Grads Ready to Take on the World

Terry Alumni The Importance of Giving Back

You never know what light you might spark in others.

“Success is the attainment of goals you’ve set for yourself in life.” Howard Terry

In 1987, Howard and Nancy Terry founded what is now the largest private source for scholarships in Texas. The Terrys believed that the students to whom they extended a helping hand would, in turn, give back – to the Foundation, to their college campuses, to their communities and beyond. Today, the success and impact of thousands of Terry Scholars stand as testimonies to the wisdom of that belief. Mr. and Mrs. Terry passed away in 2012, but their legacy lives on in each Terry Scholar who acts as a shining example of their vision and leaves a mark on the world around them.

Many Stars Come From Texas 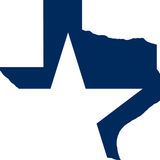