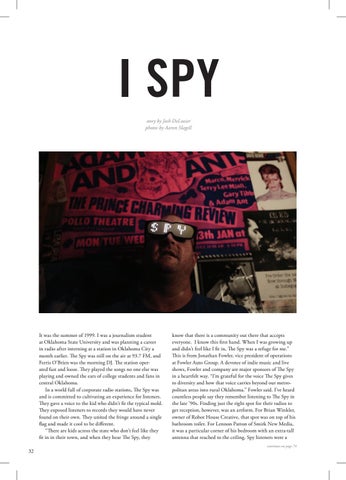 I SPY story by Josh DeLozier photos by Aaron Slagell

It was the summer of 1999. I was a journalism student at Oklahoma State University and was planning a career in radio after interning at a station in Oklahoma City a month earlier. The Spy was still on the air at 93.7 FM, and Ferris O’Brien was the morning DJ. The station operated fast and loose. They played the songs no one else was playing and owned the ears of college students and fans in central Oklahoma. In a world full of corporate radio stations, The Spy was and is committed to cultivating an experience for listeners. They gave a voice to the kid who didn’t fit the typical mold. They exposed listeners to records they would have never found on their own. They united the fringe around a single flag and made it cool to be different. “There are kids across the state who don’t feel like they fit in in their town, and when they hear The Spy, they 32

know that there is a community out there that accepts everyone. I know this first hand. When I was growing up and didn’t feel like I fit in, The Spy was a refuge for me.” This is from Jonathan Fowler, vice president of operations at Fowler Auto Group. A devotee of indie music and live shows, Fowler and company are major sponsors of The Spy in a heartfelt way. “I’m grateful for the voice The Spy gives to diversity and how that voice carries beyond our metropolitan areas into rural Oklahoma.” Fowler said. I’ve heard countless people say they remember listening to The Spy in the late ’90s. Finding just the right spot for their radios to get reception, however, was an artform. For Brian Winkler, owner of Robot House Creative, that spot was on top of his bathroom toilet. For Lennon Patton of Smirk New Media, it was a particular corner of his bedroom with an extra-tall antenna that reached to the ceiling. Spy listeners were a continues on page 74 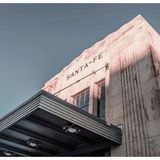