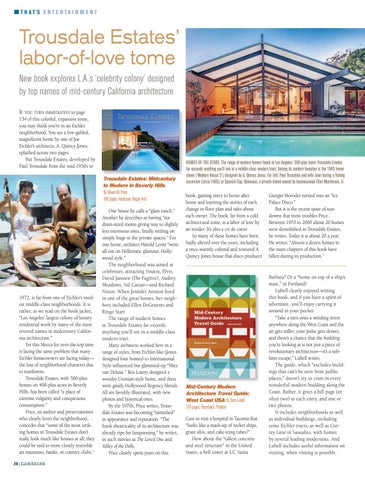 Trousdale Estates’ labor-of-love tome New book explores L.A.’s ‘celebrity colony’ designed by top names of mid-century California architecture If you turn immediately to page 134 of this colorful, expansive tome, you may think you’re in an Eichler neighborhood. You see a low-gabled, magnificent home by one of Joe Eichler’s architects, A. Quincy Jones, splashed across two pages. But Trousdale Estates, developed by Paul Trousdale from the mid-1950s to Trousdale Estates: Midcentury to Modern in Beverly Hills By Steven M. Price. 348 pages. Hardcover. Regan Arts.

1972, is far from one of Eichler’s modest middle-class neighborhoods. It is rather, as we read on the book jacket, “Los Angeles’ largest colony of luxury residential work by many of the most revered names in midcentury California architecture.” Yet this Mecca for over-the-top taste is facing the same problem that many Eichler homeowners are facing today— the loss of neighborhood character due to teardowns. Trousdale Estates, with 500-plus homes on 400-plus acres in Beverly Hills, has been called “a place of extreme vulgarity and conspicuous consumption.” Price, an author and preservationist who clearly loves the neighborhood, concedes that “some of the most striking homes in Trousdale Estates don’t really look much like houses at all; they could be said to more closely resemble art museums, banks, or country clubs.” 28 C A M O D E R N

One house he calls a “glam ranch.” Another he describes as having “stadium-sized rooms giving way to slightly less enormous ones, finally settling on simply huge in the private spaces.” For one home, architect Harold Levitt “went all out on Hellenistic glamour, Hollywood style.” The neighborhood was aimed at celebrities, attracting Sinatra, Elvis, David Janssen (The Fugitive), Audrey Meadows, Sid Caesar—and Richard Nixon. When Jennifer Aniston lived in one of the great homes, her neighbors included Ellen DeGeneres and Ringo Starr. The range of modern homes in Trousdale Estates far exceeds anything you’ll see in a middle-class modern tract. Many architects worked here in a range of styles, from Eichler-like (Jones designed four homes) to International Style influenced but glammed-up “Mies van Deluxe.” Rex Lotery designed a woodsy Usonian-style home, and there were gaudy Hollywood Regency blends. All are lavishly illustrated, with new photos and historical ones. By the 1970s, Price writes, Trousdale Estates was becoming “tarnished” in appearance and reputation. “The frank theatricality of its architecture was already ripe for lampooning,” he writes, in such movies as The Loved One and Valley of the Dolls. Price clearly spent years on this

HOMES OF THE STARS. The range of modern homes found at Los Angeles’ 500-plus home Trousdale Estates far exceeds anything you’ll see in a middle-class modern tract. Among its modern beauties is the 1965 home above (‘Modern House 5’) designed by A. Quincy Jones. Far left: Paul Trousdale and wife Jean during a fishing excursion (circa 1965) at Spanish Cay, Bahamas, a private island owned by businessman Clint Murchison, Jr. book, gaining entry to home after home and learning the stories of each change in floor plan and tales about each owner. The book, far from a cold architectural tome, is a labor of love by an insider. It’s also a cri de coeur. So many of these homes have been badly altered over the years, including a once-warmly colored and textured A. Quincy Jones house that disco producer

Mid-Century Modern Architecture Travel Guide: West Coast USA By Sam Lubell. 376 pages. Paperback. Phaidon. Care to visit a hospital in Tacoma that “looks like a mash-up of rocket ships, grain silos, and cake-icing tubes?” How about the “tallest concrete and steel structure” in the United States, a bell tower at UC Santa

Giorgio Moroder turned into an “Ice Palace Disco.” But it is the recent spate of teardowns that most troubles Price. Between 1970 to 2000 about 20 homes were demolished in Trousdale Estates, he writes. Today it is about 20 a year. He writes: “Almost a dozen homes in the main chapters of this book have fallen during its production.”

Barbara? Or a “home on top of a ship’s mast,” in Portland? Lubell clearly enjoyed writing this book, and if you have a spirit of adventure, you’ll enjoy carrying it around in your pocket. “Take a turn onto a winding street anywhere along the West Coast and the air gets stiller, your pulse gets slower, and there’s a chance that the building you’re looking at is not just a piece of revolutionary architecture—it’s a sublime escape,” Lubell writes. The guide, which “excludes buildings that can’t be seen from public places,” doesn’t try to cram in every wonderful modern building along the Coast. Rather, it gives a full page (or often two) to each entry, and one or two photos. It includes neighborhoods as well as individual buildings, including some Eichler tracts, as well as Currey Lane in Sausalito, with homes by several leading modernists. And Lubell includes useful information on visiting, when visiting is possible.

Welcome to the Fall 2017 issue of the Eichler Network's CA-Modern Magazine, dedicated to the home maintenance, remodeling, and furnishing needs of mid-century modern households across California. 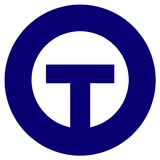