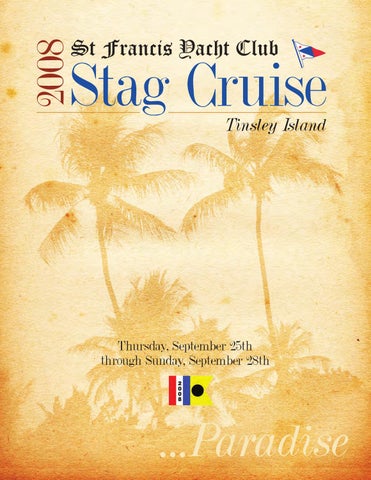 Reservations Attendance is for male members and guests. Cancellations must be in writing and received by the club no later than September 12 to avoid getting charged. The cost covers all food, liquor, berthing, entertainment, and activities, for the entire cruise. Non-boat owning members must make their own berthing arrangements.

Anchorage Stag Cruise Port Captain, Jeff Fenton will furnish each yacht with a berth assignment. Jeff Fenton is located on Fast Freight. Yachts anchoring outside the lagoon must provide their own shore boat service.

Identification Badges Each member and guest will be issued a name badge, which will serve as a ticket to the cruise. Please wear it whenever you are ashore. Different colored nametags denote the following: White and Blue - St. Francis Yacht Club members, White and Red memberâ&amp;#x20AC;&amp;#x2122;s guests, Gold - VIP Club guests, White and Blue with Orange Dot - Stag Committee Members, White and Red, with Red Dot - Entertainment Production, and staff.

Meal Service Each of the gourmet breakfasts, luncheons, and dinners are prepared under the direction of Executive Chef Joseph Warzeniak. A midnight supper will be served from 2300â&amp;#x20AC;&amp;#x201C;Midnight on Thursday, Friday and Saturday night. Box lunches will be provided at the Club on Thursday morning for the up-river cruise and will be furnished at Tinsley for the homeward bound trip on Sunday.

Liquor &amp; Bar Service Each yacht will be furnished one bottle of liquor, wine or a six pack of beer on Thursday morning for each person aboard. The bar will be open at Tinsley at 1200 with hosted drinks for the entire cruise.

Information Packet Skippers can pick up information packets at 0600 Thursday, September 25th at the main club. Each packet contains a copy of the Cruise participants, skipper and crew list, identification badges, docking plan, program and chits for Stag Cruise burgee, shirts and caps for skipper and crew that met the sign-up deadline.

Departure Time The 51st Annual Stag Cruise will commence at 0600 Thursday, September 25th, 2008 in the main Clubhouse of the St. Francis Yacht Club. Participating yachts will depart for Tinsley Island immediately following breakfast for a long weekend of camaraderie, relaxation, entertainment and friendly competition. The cruise will end after breakfast on Sunday, September 28th, 2008 when all yachts will depart for their home ports.

Notes for First Timers Sport clothes with boat shoes are the uniform of the day. Don’t forget your swim trunks, athletic shoes, sunglasses, bug repellent, sun lotion, and sleeping bag (if required on the yacht where you are berthing.)

Sick Bay Dr. Brian Elchinoff will be in attendance. He is staying on the yacht Fast Freight.

Messages and Phone Calls There are no telephones on Tinsley Island. Cell phones are not allowed on the Island but may be used on board and inside any yacht. Emergency messages may be routed to the Island by calling the St. Francis Yacht Club, 415-563-6363, and requesting that the message be forwarded to the Island. A message board will be located in the Lanai Bar area.

No NoÕs Tinsley is a special place – please help us to keep it that way. No fireworks, no firearms, no cell phones, no pyrotechnics, no pets, no water fights, no females, no bare feet at meals, no tank tops, no swimsuits at meals, no conduct unbecoming of a gentleman. Absolutely no small watercraft allowed on the River Cruise. Only designated and approved vessels. Violation of this directive will be expulsion from the island. A shirt with a collar is required at dinner. Thank you for your cooperation.

Castoff for the up-river cruise to Tinsley Island. You’re heading to Paradise!

Dunking of Despair: Welcome to Paradise! Once again we cast Despair aside for a few brief days to revel in one of Yachting’s legendary events, the 2008 Stag Cruise. But is this truly the Garden of Eden? Only time and a beverage by the pool will tell

Thursday Night Show: In these fast paced times, juggler Michael Brill and comedian Dan Cummins will have your hearts racing and your sides splitting. Laugh you way into your berth tonight.

Reveille followed by Eye Openers served at the Bar

Wine Tasting Competition – Test your palate on the Main Stage

Phil Claypool performs our own Stag Cruise Blues and the grooving Leo Vigil Band takes us “Rockin’ Through Paradise.”

The Dunking of Despair - Thursday 1845 by the Pool Welcome to Paradise! Once again we cast Despair aside for a few brief days to revel in one of Yachting’s legendary events, the 2008 Stag Cruise. But is this truly the Garden of Eden? Only time and a beverage by the pool will tell.

Michael Brill - Thursday 2100 Main Stage We kick off our first evening’s merriment with juggler extraordinaire Michael Brill. Michael hails from Atlanta and has performed with groups as diverse as the Dixie Chicks and Squire Nut Zippers. He has performed at the Roxy in Atlanta, the Operyland Hotel in Nashville, and toured in New York City and Boston.

The Dan Cummins Show - Thursday 2100 Main Stage Combining absurd, imaginative, yet somehow relatable topics with a laid back, signature delivery style, Dan is one of the most requested comics on the college circuit, performing at 110 schools from Maine to Washington during the 2007-08 school year alone. Dan has appeared on “The Late, Late Show”, “Last Comic Standing: Season 6”, Comedy Central’s “Live at Gotham”, and his first 1/2 hour special, “Comedy Central Presents Dan Cummins.”

ÒRockinÕ Through ParadiseÓ - Friday 2100 Main Stage Tonight Paradise becomes even sweeter as we rock down memory lane. We’ll chronicle the golden age of Rock and Roll – the fabulous 50s, 60s and 70s. The Leo Vigil Band will have you clapping your hands and singing along to the huge hits that turned Bill Haley and the Comets, Chuck Berry, the boys from Liverpool, and Jimi Hendrix into pop icons.

MembersÕ Show ÒNoahÕs YachtÓ - Saturday 2100 Main Stage The Stag Cruise Members’ Show features our own fearless St. Francis Tinsley Players and the provocative Damascus Cheerleaders in a hilarious revision of the story of Noah, the grand old sailor. The Members’ Show has been part of Stag Cruise lore for generations. This year’s production is again from the fertile (twisted?) mind of Herb Goodrich. Don’t miss the fun. No, the cheerleaders are not available for private performances.

Lighthouse Speakers Friday 1630: A Lighthouse Talk panel, consisting of Dean Brenner, US Olympic Sailing Coach, with St. Francis Yacht Club Olympic Team members, Austin Sperry, Star Class and Zach Railey, Silver Medalist in the Finn Class. They will discuss the recent 29th Olympiad held in China and plans for the next Olympics. A question and answer session to follow the panel discussion.

Saturday 1630: Decorated Navy SEAL’s CDR Keith Davids and LCDR Leif Babin discuss two aspects of SEAL life. Commander Davids – a distinguished Olympic class sailor, Ironman Triathlete, and US Naval Academy Graduate is presently Commanding Officer of SEAL Team ONE. He’ll discuss the business of the SEAL organization; how they train, deploy and fight the Global War on Terror. LCDR Leif Babin - a Silver Star, Bronze Star and Purple Heart recipient – will describe his most recent actions and involvement with Iraq ground operations in the Ramadi, al Anbar Province, and the Suni Tribal awakening that has quelled hostilities in the war.

Reveille followed by Eye Openers served at the Bar

Pusser’s Rum Painkillers served on return from the River Cruise

Reveille early for departures Breakfast and bracers. Pick up Lunch bags in the Lanai

Sign up at Tinsley. Players pick their own partners. The tourney will commence Friday at 1000. After lunch the tourney will resume at 1400. The tournament director will direct each team to play no less than four different opponents. High score after eight games will determine the winners to compete in the semi-finals and finals. Finals will be held Saturday at 1400. Prizes to the top two teams.

Come and hang out in the newly constructed Pole Barn in the corporate yard. We will have tables set up for beer pong, dart boards for your use and Friday and Saturday from 1400 to 1800 there will be a No Limit Texas Hold’em Tournament (no buy in required).

Bocceball Tournament Sign up at Tinsley. Players pick their own partners. This popular event requires participants to be ready to play when your team is called. Play will commence Friday at 1000. After lunch play will resume at 1400. Finals will be held Saturday at 1400.

Sign up at Tinsley. This event will be held on the back of the island by the goat pen. Come as a single player or as a team of 5. Cost will be $25 per person for 3 games (coveralls can be purchased for $5). Members can sign chits – guests may pay cash. Wear appropriate clothing and closed toe shoes. Course will be open from 1000 to 1600 on Friday only.

Sign up at Tinsley. There is a separate competition for Group A (55 yrs. and over), Group B (35 to 55 yrs. old) and Group C (under 35 yrs. Old) The regatta will be under the direction of John Craig, St. Francis Yacht Club Race Manager. The regatta will commence Friday at 1000 and will resume after lunch at 1400. Please check in at the Laser Dock on Friday morning for specific times for your Group. Finals will be held Saturday at the director’s discretion. Please be standing by and ready to sail when your heat is called. For your viewing pleasure, there will be a pontoon boat equipped with a bar anchored at the race course.

The larger yachts on the Main Dock North Outside are designated as official River Cruise yachts. The names of the yachts will be posted on the message board at the Lanai bar. Life jackets are required for each person aboard. (Remember to bring your own life jacket). Yachts, other than the Official River Cruise yachts shall not accompany or follow the cruise. Violators will be banned from the island for the remainder of the cruise. Thank you for your cooperation. NOTE: Skippers’ meeting on Saturday at 0900 on the yacht, Besame. No ski boats or runabouts.

Volleyball Tournament Sign up at Tinsley. Players pick their own teams. We will have two tournaments - 6 vs. 6 players and 2 vs. 2 players. Points will be scored on every serve to keep the games going faster. Play will commence Friday at 1000. After lunch play will resume at 1400. Finals will be held Saturday at 1400.

Golf Tournament Commencing at 1400 on Saturday. Three tries to be the closest to the pin on Doggie Island from our floating tee box adjacent to the Waldorf Houseboat

Liars Dice Tournament Sign up at Tinsley. The tourney director will supervise pairings. Play will commence Saturday at 1400 at the bar.

Horse Shoes Sign up at Tinsley. Players pick their own partners. This is a doubles only competition under International Rules of Horseshoe Pitching. This popular event requires participants to be ready to play when your team is called. Play will commence Friday at 1000. After lunch play will resume at 1400. Finals will be held Saturday at 1400.

2008 Stag Cruise Wine Tasting Competition Limited to the first 50 to sign up, and done in a blind tasting format, you’ll be given the answers in advance. Properly identify eight numbered California varietals and advance to the second flight. Once there, you’ll work through ten international wines comprised of four whites and six reds.

You should have signed up by the deadline! 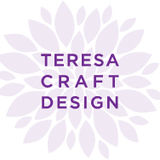