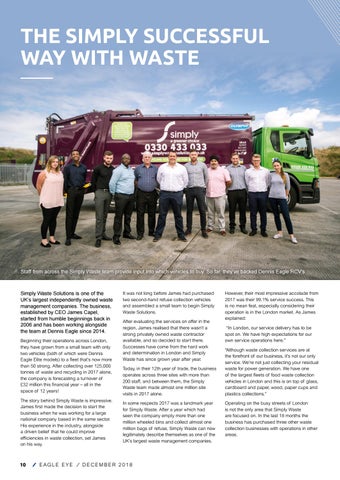 THE SIMPLY SUCCESSFUL WAY WITH WASTE

Staff from across the Simply Waste team provide input into which vehicles to buy. So far, they’ve backed Dennis Eagle RCV’s

Simply Waste Solutions is one of the UK’s largest independently owned waste management companies. The business, established by CEO James Capel, started from humble beginnings back in 2006 and has been working alongside the team at Dennis Eagle since 2014. Beginning their operations across London, they have grown from a small team with only two vehicles (both of which were Dennis Eagle Elite models) to a fleet that’s now more than 50 strong. After collecting over 125,000 tonnes of waste and recycling in 2017 alone, the company is forecasting a turnover of £32 million this financial year – all in the space of 12 years! The story behind Simply Waste is impressive. James first made the decision to start the business when he was working for a large national company based in the same sector. His experience in the industry, alongside a driven belief that he could improve efficiencies in waste collection, set James on his way.

It was not long before James had purchased two second-hand refuse collection vehicles and assembled a small team to begin Simply Waste Solutions. After evaluating the services on offer in the region, James realised that there wasn’t a strong privately owned waste contractor available, and so decided to start there. Successes have come from the hard work and determination in London and Simply Waste has since grown year after year. Today, in their 12th year of trade, the business operates across three sites with more than 200 staff, and between them, the Simply Waste team made almost one million site visits in 2017 alone. In some respects 2017 was a landmark year for Simply Waste. After a year which had seen the company empty more than one million wheeled bins and collect almost one million bags of refuse, Simply Waste can now legitimately describe themselves as one of the UK’s largest waste management companies.

However, their most impressive accolade from 2017 was their 99.1% service success. This is no mean feat, especially considering their operation is in the London market. As James explained: “In London, our service delivery has to be spot on. We have high expectations for our own service operations here.” “Although waste collection services are at the forefront of our business, it’s not our only service. We’re not just collecting your residual waste for power generation. We have one of the largest fleets of food waste collection vehicles in London and this is on top of glass, cardboard and paper, wood, paper cups and plastics collections.” Operating on the busy streets of London is not the only area that Simply Waste are focused on. In the last 18 months the business has purchased three other waste collection businesses with operations in other areas. 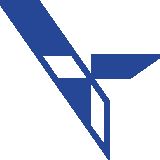 Dennis Eagle and Terberg Matec UK are proud to launch the first edition of the Eagle Eye Magazine, packed full of exisiting stories from acr...

Dennis Eagle and Terberg Matec UK are proud to launch the first edition of the Eagle Eye Magazine, packed full of exisiting stories from acr...