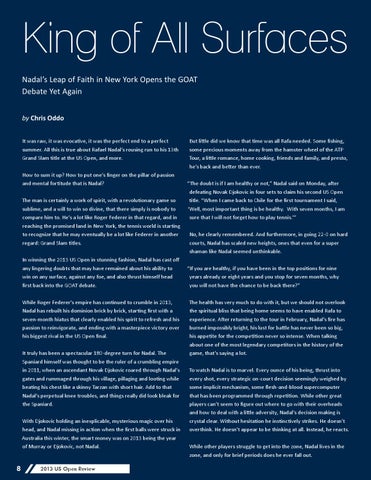 King of All Surfaces Nadal’s Leap of Faith in New York Opens the GOAT Debate Yet Again by Chris Oddo It was raw, it was evocative, it was the perfect end to a perfect summer. All this is true about Rafael Nadal’s rousing run to his 13th Grand Slam title at the US Open, and more. How to sum it up? How to put one’s finger on the pillar of passion and mental fortitude that is Nadal? The man is certainly a work of spirit, with a revolutionary game so sublime, and a will to win so divine, that there simply is nobody to compare him to. He’s a lot like Roger Federer in that regard, and in reaching the promised land in New York, the tennis world is starting to recognize that he may eventually be a lot like Federer in another regard: Grand Slam titles. In winning the 2013 US Open in stunning fashion, Nadal has cast off any lingering doubts that may have remained about his ability to win on any surface, against any foe, and also thrust himself head first back into the GOAT debate. While Roger Federer’s empire has continued to crumble in 2013, Nadal has rebuilt his dominion brick by brick, starting first with a seven-month hiatus that clearly enabled his spirit to refresh and his passion to reinvigorate, and ending with a masterpiece victory over his biggest rival in the US Open final. It truly has been a spectacular 180-degree turn for Nadal. The Spaniard himself was thought to be the ruler of a crumbling empire in 2011, when an ascendant Novak Djokovic roared through Nadal’s gates and rummaged through his village, pillaging and looting while beating his chest like a skinny Tarzan with short hair. Add to that Nadal’s perpetual knee troubles, and things really did look bleak for the Spaniard. With Djokovic holding an inexplicable, mysterious magic over his head, and Nadal missing in action when the first balls were struck in Australia this winter, the smart money was on 2013 being the year of Murray or Djokovic, not Nadal.

But little did we know that time was all Rafa needed. Some fishing, some precious moments away from the hamster wheel of the ATP Tour, a little romance, home cooking, friends and family, and presto, he’s back and better than ever. “The doubt is if I am healthy or not,” Nadal said on Monday, after defeating Novak Djokovic in four sets to claim his second US Open title. “When I came back to Chile for the first tournament I said, ‘Well, most important thing is be healthy. With seven months, I am sure that I will not forget how to play tennis.’” No, he clearly remembered. And furthermore, in going 22-0 on hard courts, Nadal has scaled new heights, ones that even for a super shaman like Nadal seemed unthinkable. “If you are healthy, if you have been in the top positions for nine years already or eight years and you stop for seven months, why you will not have the chance to be back there?” The health has very much to do with it, but we should not overlook the spiritual bliss that being home seems to have enabled Rafa to experience. After returning to the tour in February, Nadal’s fire has burned impossibly bright, his lust for battle has never been so big, his appetite for the competition never so intense. When talking about one of the most legendary competitors in the history of the game, that’s saying a lot. To watch Nadal is to marvel. Every ounce of his being, thrust into every shot, every strategic on-court decision seemingly weighed by some implicit mechanism, some flesh-and-blood supercomputer that has been programmed through repetition. While other great players can’t seem to figure out where to go with their overheads and how to deal with a little adversity, Nadal’s decision making is crystal clear. Without hesitation he instinctively strikes. He doesn’t overthink. He doesn’t appear to be thinking at all. Instead, he reacts. While other players struggle to get into the zone, Nadal lives in the zone, and only for brief periods does he ever fall out.

The 2013 US Open did not disappoint. From Rafa's historic hard-court streak to Serena's 17th major title, we analyze the best and worst of the year's final Grand Slam. Plus, does Roger Federer have the yips? Read all about that and more in this edition of Tennis Now Magazine! 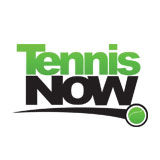