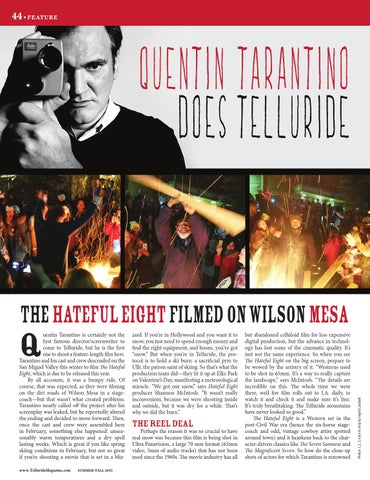 uentin Tarantino is certainly not the first famous director/screenwriter to come to Telluride, but he is the first one to shoot a feature-length film here. Tarantino and his cast and crew descended on the San Miguel Valley this winter to film The Hateful Eight, which is due to be released this year. By all accounts, it was a bumpy ride. Of course, that was expected, as they were filming on the dirt roads of Wilson Mesa in a stagecoach—but that wasn’t what created problems. Tarantino nearly called off the project after his screenplay was leaked, but he reportedly altered the ending and decided to move forward. Then, once the cast and crew were assembled here in February, something else happened: unseasonably warm temperatures and a dry spell lasting weeks. Which is great if you like spring skiing conditions in February, but not so great if you’re shooting a movie that is set in a blizwww.TellurideMagazine.com

zard. If you’re in Hollywood and you want it to snow, you just need to spend enough money and find the right equipment, and boom, you’ve got “snow.” But when you’re in Telluride, the protocol is to hold a ski burn: a sacrificial pyre to Ullr, the patron saint of skiing. So that’s what the production team did—they lit it up at Elks Park on Valentine’s Day, manifesting a meteorological miracle. “We got our snow,” says Hateful Eight producer Shannon McIntosh. “It wasn’t really inconvenient, because we were shooting inside and outside, but it was dry for a while. That’s why we did the burn.”

Perhaps the reason it was so crucial to have real snow was because this film is being shot in Ultra Panavision, a large 70 mm format (65mm video, 5mm of audio tracks) that has not been used since the 1960s. The movie industry has all

but abandoned celluloid film for less expensive digital production, but the advance in technology has lost some of the cinematic quality. It’s just not the same experience. So when you see The Hateful Eight on the big screen, prepare to be wowed by the artistry of it. “Westerns used to be shot in 65mm. It’s a way to really capture the landscape,” says McIntosh. “The details are incredible on this. The whole time we were there, we’d fire film rolls out to LA. daily, to watch it and check it and make sure it’s fine. It’s truly breathtaking. The Telluride mountains have never looked so good.” The Hateful Eight is a Western set in the post-Civil War era (hence the six-horse stagecoach and odd, vintage cowboy attire spotted around town) and it hearkens back to the character-driven classics like The Seven Samurai and The Magnificent Seven. So how do the close-up shots of actors for which Tarantino is renowned