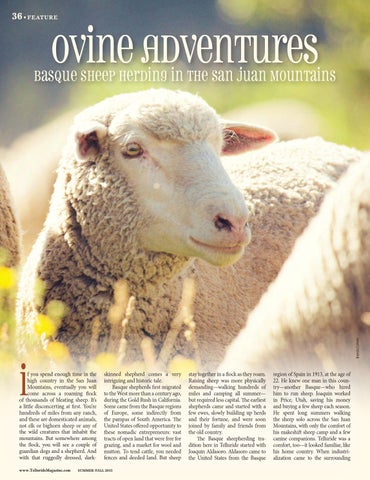 f you spend enough time in the high country in the San Juan Mountains, eventually you will come across a roaming flock of thousands of bleating sheep. It’s a little disconcerting at first. You’re hundreds of miles from any ranch, and these are domesticated animals, not elk or bighorn sheep or any of the wild creatures that inhabit the mountains. But somewhere among the flock, you will see a couple of guardian dogs and a shepherd. And with that ruggedly dressed, darkwww.TellurideMagazine.com

skinned shepherd comes a very intriguing and historic tale. Basque shepherds first migrated to the West more than a century ago, during the Gold Rush in California. Some came from the Basque regions of Europe, some indirectly from the pampas of South America. The United States offered opportunity to these nomadic entrepreneurs: vast tracts of open land that were free for grazing, and a market for wool and mutton. To tend cattle, you needed fences and deeded land. But sheep

stay together in a flock as they roam. Raising sheep was more physically demanding—walking hundreds of miles and camping all summer— but required less capital. The earliest shepherds came and started with a few ewes, slowly building up herds and their fortune, and were soon joined by family and friends from the old country. The Basque sheepherding tradition here in Telluride started with Joaquin Aldasoro. Aldasoro came to the United States from the Basque

region of Spain in 1913, at the age of 22. He knew one man in this country—another Basque—who hired him to run sheep. Joaquin worked in Price, Utah, saving his money and buying a few sheep each season. He spent long summers walking the sheep solo across the San Juan Mountains, with only the comfort of his makeshift sheep camp and a few canine companions. Telluride was a comfort, too—it looked familiar, like his home country. When industrialization came to the surrounding