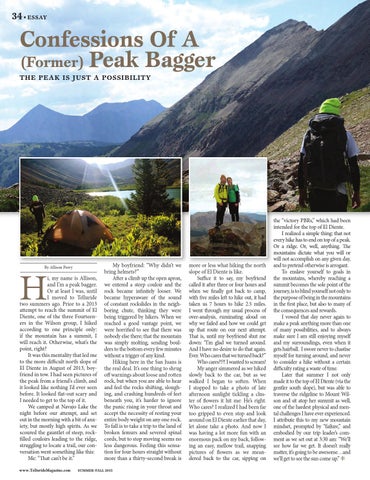 i, my name is Allison, and I’m a peak bagger. Or at least I was, until I moved to Telluride two summers ago. Prior to a 2013 attempt to reach the summit of El Diente, one of the three Fourteeners in the Wilson group, I hiked according to one principle only: if the mountain has a summit, I will reach it. Otherwise, what’s the point, right? It was this mentality that led me to the more difficult north slope of El Diente in August of 2013, boyfriend in tow. I had seen pictures of the peak from a friend’s climb, and it looked like nothing I’d ever seen before. It looked flat-out scary and I needed to get to the top of it. We camped at Navajo Lake the night before our attempt, and set out in the morning with a bit of anxiety, but mostly high spirits. As we scoured the gauntlet of steep, rockfilled couloirs leading to the ridge, struggling to locate a trail, our conversation went something like this: Me: “That can’t be it.”

My boyfriend: “Why didn’t we bring helmets?” After a climb up the open apron, we entered a steep couloir and the rock became infinitely looser. We became hyperaware of the sound of constant rockslides in the neighboring chute, thinking they were being triggered by hikers. When we reached a good vantage point, we were horrified to see that there was nobody else there; that the mountain was simply molting, sending boulders to the bottom every few minutes without a trigger of any kind. Hiking here in the San Juans is the real deal. It’s one thing to shrug off warnings about loose and rotten rock, but when you are able to hear and feel the rocks shifting, sloughing, and crashing hundreds of feet beneath you, it’s harder to ignore the panic rising in your throat and accept the necessity of resting your entire body weight on any one rock. To fall is to take a trip to the land of broken femurs and severed spinal cords, but to stop moving seems no less dangerous. Feeling this sensation for four hours straight without more than a thirty-second break is

more or less what hiking the north slope of El Diente is like. Suffice it to say, my boyfriend called it after three or four hours and when we finally got back to camp, with five miles left to hike out, it had taken us 7 hours to hike 2.5 miles. I went through my usual process of over-analysis, ruminating aloud on why we failed and how we could get up that route on our next attempt. That is, until my boyfriend shut me down: “I’m glad we turned around. And I have no desire to do that again. Ever. Who cares that we turned back?” Who cares?!?! I wanted to scream! My anger simmered as we hiked slowly back to the car, but as we walked I began to soften. When I stopped to take a photo of late afternoon sunlight tickling a cluster of flowers it hit me: He’s right. Who cares? I realized I had been far too gripped to even stop and look around on El Diente earlier that day, let alone take a photo. And now I was having a lot more fun with an enormous pack on my back, following an easy, mellow trail, snapping pictures of flowers as we meandered back to the car, sipping on

the “victory PBRs,” which had been intended for the top of El Diente. I realized a simple thing: that not every hike has to end on top of a peak. Or a ridge. Or, well, anything. The mountains dictate what you will or will not accomplish on any given day, and to pretend otherwise is arrogant. To enslave yourself to goals in the mountains, whereby reaching a summit becomes the sole point of the journey, is to blind yourself not only to the purpose of being in the mountains in the first place, but also to many of the consequences and rewards. I vowed that day never again to make a peak anything more than one of many possibilities, and to always make sure I am still enjoying myself and my surroundings, even when it gets hairball. I swore never to chastise myself for turning around, and never to consider a hike without a certain difficulty rating a waste of time. Later that summer I not only made it to the top of El Diente (via the gentler south slope), but was able to traverse the ridgeline to Mount Wilson and sit atop her summit as well, one of the hardest physical and mental challenges I have ever experienced. I attribute this to my new mountain mindset, prompted by “failure,” and embodied by our trip leader’s comment as we set out at 3:30 am: “We’ll see how far we get. It doesn’t really matter, it’s going to be awesome…and we’ll get to see the sun come up.” \