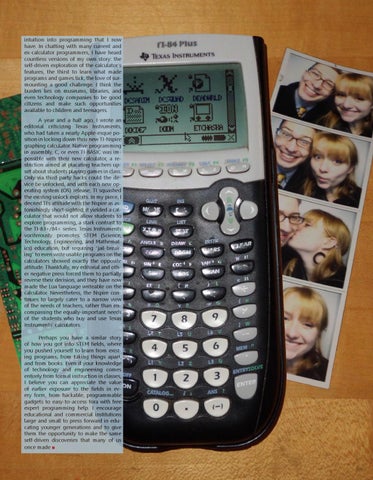 intuition into programming that I now have. In chatting with many current and ex-calculator programmers, I have heard countless versions of my own story: the self-driven exploration of the calculator’s features, the thirst to learn what made programs and games tick, the love of surmounting a good challenge. I think the burden lies on museums, libraries, and even technology companies to be good citizens and make such opportunities available to children and teenagers. A year and a half ago, I wrote an editorial criticizing Texas Instruments, who had taken a nearly Apple-esque position in locking down their new TI-Nspire graphing calculator. Native programming in assembly, C, or even TI-BASIC was impossible with their new calculator, a restriction aimed at placating teachers upset about students playing games in class. Only via third-party hacks could the device be unlocked, and with each new operating system (OS) release, TI squashed the existing unlock exploits. In my piece, I decried TI’s attitude with the Nspire as astonishingly short-sighted; it yielded a calculator that would not allow students to explore programming, a stark contrast to the TI-83+/84+ series. Texas Instruments vociferously promotes STEM (Science, Technology, Engineering, and Mathematics) education, but requiring “jail-breaking” to even write usable programs on the calculators showed exactly the opposite attitude. Thankfully, my editorial and other negative press forced them to partially reverse their decision, and they have now made the Lua language writeable on the calculator. Nevertheless, the Nspire continues to largely cater to a narrow view of the needs of teachers, rather than encompassing the equally-important needs of the students who buy and use Texas Instruments’ calculators. Perhaps you have a similar story of how you got into STEM fields, where you pushed yourself to learn from existing programs, from taking things apart, and from books. Even if your knowledge of technology and engineering comes entirely from formal instruction in classes, I believe you can appreciate the value of earlier exposure to the fields in every form, from hackable, programmable gadgets to easy-to-access fora with free expert programming help. I encourage educational and commercial institutions large and small to press forward in educating younger generations and to give them the opportunity to make the same self-driven discoveries that many of us once made ■ 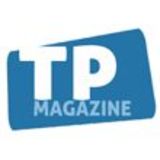 In this issue, we explore the future of technology. Don't miss our Q&A with VC Ronald Schwang and researcher Eric Schadt, and a guest articl...

In this issue, we explore the future of technology. Don't miss our Q&A with VC Ronald Schwang and researcher Eric Schadt, and a guest articl...